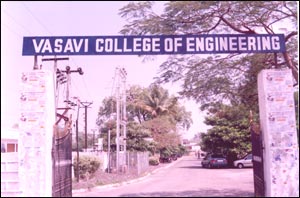 Ramakant D S / fullhyd.com
If not anything else, Vasavi has history on its side. Established way back in 1981, this is one of the twin cities' earliest private colleges. Many believe this to be the sole reason why students prefer Vasavi over other colleges. Let us not sugar-coat this academic system and say that an EAMCET ranker has a host of "promising options" ahead of him, but Vasavi College of Engineering does surely stands tall amongst others in its own way.

The college has four blocks apart from the canteen and the Departmental Workshops. Each block houses a department with the building named after prominent scientists. Plans are on to introduce two new Masters courses in Advanced Design & Manufacturing in Mechanical Engineering and Embedded Systems & VLSI Design in the ECE department from 2004 onwards.

One of the standards Vasavi has set is in grooming the co-curriculum and extra-curricular activites in the college. Almost every month, the students, with the help of the staff and the management, regularly hold seminars and conferences in the college. The students also come forward to keep their in-house clubs active. These include the SpeakEasy Club (for orators), Campfire (for writers), Kirdaars (for theatre-buffs) and Flamencoes (for music-lovers), and hold sessions on a monthly or weekly basis to nurture the innate talent amongst their members.

Speaking of extra-curricular activities, we must mention Vasavi's annual cultural festival - Euphoria. Every year during February-March, VCE throws its door open for 3 days of complete fun and entertainment. With celebrity performers like Sivamani, Parikrama, Euphoria and DJ Ryan performing at the college, Euphoria is quite the campus event of the year.

ADVERTISEMENT
This page was tagged for
hyd vasavi clg sex videos
vasavi engineering college ibrahim bagh
www.vasavi college hyderabad girl fuck
telugu clg girls vasavi
ph no of sexy clg girls of vasvi engeniaring clg ibrahim bagh
Follow @fullhyderabad
Follow fullhyd.com on
About Hyderabad
The Hyderabad Community
Improve fullhyd.com
More
Our Other Local Guides
Our other sites
© Copyright 1999-2009 LRR Technologies (Hyderabad), Pvt Ltd. All rights reserved. fullhyd, fullhyderabad, Welcome To The Neighbourhood are trademarks of LRR Technologies (Hyderabad) Pvt Ltd. The textual, graphic, audio and audiovisual material in this site is protected by copyright law. You may not copy, distribute, or use this material except as necessary for your personal, non-commercial use. Any trademarks are the properties of their respective owners. More on Hyderabad, India. Jobs in Hyderabad.