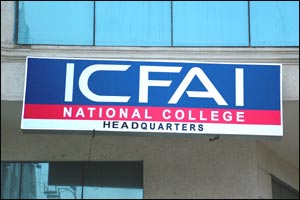 C Venkatesh / fullhyd.com
Any review of the ICFAI Business School is incomplete without an understanding of ICFAI itself. In a remarkably prescient act, ICFAI stood up in 1984 to challenge the monopoly of the Institute of Chartered Accountants of India. The gumption of this approach is attested to by the astounding fiat issued by the ICAI: "No articled clerk is allowed to pursue CFA course or any other course conducted by ICFAI."

Its plans, though, went well beyond just needling ICAI. The most recent peak was the establishment of the ICFA University - registered in the not-exactly-Oxbridge states of Mizoram, Uttaranchal, Tripura, Meghalaya and Sikkim. This canny act was partly undone by the Supreme Court's striking down similar largesse in Jharkhand and Chattisgarh. This has left watchers wondering if the Court will likewise strike down the other States' recognitions, too.

ICFAI has bravely attempted to deflect the criticism and negative publicity that followed - and in doing so has been vastly more successful than IIPM! - but the reach of this extraordinary organisation may have exceeded its grasp.

Given the fighting spirit the organisation has displayed in taking on ICAI, and given the track record, it's tempting to apply the same yardstick to estimating the efficacy of the MBA programs offered by the ICFAI School of Business. The ICFAI program did succeed in getting accepted, but did not succeed in "overthrowing the hegemony" of the ICAI. In the same breath, it's very likely that ICFAI will live to establish and grow its degree beyond the Jharkhands of India, but it's unlikely to ever challenge the IIMs.

But if you view this as an alternative to the IIMs, you are being extremely naive.

ICFAI is probably somewhere between the NIIT/Aptechs and the UGC-recognised universities. For a student stuck in a one-horse-village, unable to afford the luxury of tilting at exams like CAT, it does provide a lever to pry open the doors of the corporate world. The Institute has been working overtime at spreading its reach. Driving through almost any metro or B-class town in India, you're more likely to hit signs advertising various courses offered by ICFAI than Government-provided bus-stops.

And for that, it deserves recognition.

While some of the marketing claims are certainly ambitious, the ICFAI Business School does not claim to be Harvard. And it's not. It's an easier accessed route to an education, with all the limitations that the second rung brings. Just as an NIIT-diploma is not the same as a B. Tech. in Computer Science from an IIT but has certainly won a lot of the grads jobs somewhere, the ICFAI MBA is neither to be mocked at nor to be worshipped.

The slumbering, lumbering giant that is State Education is beginning to arise. Hyderabad's own Osmania University too offers an MBA without the rigors of an entrance test. It's courses like these that will probably pose the strongest challenge to the ICFAI Business School. Currently, the depth of knowledge, the brand pull, and the sheer momentum of OU probably makes the degree more valuable than that of the ICFAI.

ADVERTISEMENT
This page was tagged for
iefaibusiness school shankarpalli
icfai business school hyderabad shankarpalli
icfai shankarpally directions
shankarpally collegees
ICFAI SHANKARPALLY ADDRESS
Follow @fullhyderabad
Follow fullhyd.com on
About Hyderabad
The Hyderabad Community
Improve fullhyd.com
More
Our Other Local Guides
Our other sites
© Copyright 1999-2009 LRR Technologies (Hyderabad), Pvt Ltd. All rights reserved. fullhyd, fullhyderabad, Welcome To The Neighbourhood are trademarks of LRR Technologies (Hyderabad) Pvt Ltd. The textual, graphic, audio and audiovisual material in this site is protected by copyright law. You may not copy, distribute, or use this material except as necessary for your personal, non-commercial use. Any trademarks are the properties of their respective owners. More on Hyderabad, India. Jobs in Hyderabad.