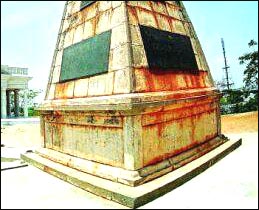 Ayanti Guha / fullhyd.com
When Michel Joachim Marie Raymond left his village in Gascony, France, little did he know that he would become a part of the rich history of the State of Hyderabad. And little did the Hyderabadi people anticipate that a foreigner from a far-off land would win their hearts for all time. Raymond's Tomb at Moosrambagh is a tale of an individual whose love for this city led him to remain here for all eternity.

20-year-old Michel Raymond left France in 1775 for the Indian shores to become a merchant like his father, but Fate had other plans for him. He joined the French forces in Pondicherry in fighting the British. Their on-and-off skirmishes and Raymond's role in the French victories brought him into the notice of the Nizam of Hyderabad. He joined the Nizam's forces in 1786; a step that was to establish and cement his bonds with Hyderabad and its people, and become a part of its lore.

He rose in the ranks rapidly and became a trusted aide of the Nizam, to the extent that a "gora" was given the crucial position of Amin Jinsi or Comptroller of Ordinance. Once he assumed charge, he revolutionized the artillery of the army and established the Gunfoundry, which still stands today as a testimony to his vision. Under his guidance, the Nizam's army became one of the best fortified and most formidable in the entire region.

Battle was in his blood, but there was more to this man than just the art of war. Raymond was known far and wide as a good, kind man who never looked down upon the local populace unlike many other foreigners. His bravery, contribution to Hyderabad and his loyalty to the Nizam won him many epithets - to the Muslims he was Musa Rahim, and to the Hindus he was Musa Ram (whence the name Musarambagh).

It's no surprise then that when this foreigner died in 1798 at the young age of 43, he was deeply mourned by all. His dear friend the Nizam had a special memorial errected for him on the top of a hillock, and it still stands there today.

The tomb is a black granite obelisk, and it has the initials JR on it. At the foot of the tomb lies a Grecian-styled pavillion, which is said to house the graves of his family. At the bottom of the hill lies another obelisk which was built over the remains of Raymond's faithful dog and horse. Even in his death, the people of Hyderabad saw to it that he was surrounded by those he loved and who had loved him back.

But the ultimate tribute to him came when the people renamed the area surrounding the tomb as Musarambagh.

The years have not been kind to Raymond's memories, with a handful of people knowing the location of the tomb and the stature of the man interred therein. The dilapidated tomb was rebuilt in April 2003, and an open-air theater around the Grecian pavilion was also constructed. And the tomb is still used as a venue for qawwali evenings held in his memory every year. But what you find when you go there today is weeds, graffiti and a sense of desolation.

The monogrammed tomb has a thin trickle of visitors, even after the renovation. The few people who do find their way there usually spend more time gazing into the panaromic view of Hyderabad that the hill affords. A cursory glance at the tomb and a few sniff of disdain about the disarray is what Raymond has been reduced to.

ADVERTISEMENT
This page was tagged for
location map for reymond tomb at malakpet
moosarambagh raymond obilisk video
Monsieur Raymond tomb
raymond graves in hyderabad
monseur rymonds
Follow @fullhyderabad
Follow fullhyd.com on
About Hyderabad
The Hyderabad Community
Improve fullhyd.com
More
Our Other Local Guides
Our other sites
© Copyright 1999-2009 LRR Technologies (Hyderabad), Pvt Ltd. All rights reserved. fullhyd, fullhyderabad, Welcome To The Neighbourhood are trademarks of LRR Technologies (Hyderabad) Pvt Ltd. The textual, graphic, audio and audiovisual material in this site is protected by copyright law. You may not copy, distribute, or use this material except as necessary for your personal, non-commercial use. Any trademarks are the properties of their respective owners. More on Hyderabad, India. Jobs in Hyderabad.