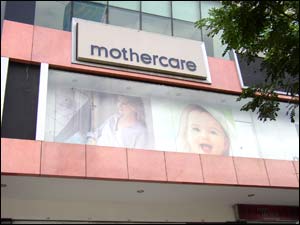 Even if you are thinking about "it" - the fact that babies are tax write-offs, the fact that babies do NOT need all the rather unaffordable, albeit cute, paraphernalia that we buy simply because we must - much against your will, you leave this cold logic right at the door of Mothercare, alongside your handbag.

This store is mother and infant bliss. British retailer Mothercare specializes in creating merchandise for mothers-to-be and new mothers, as well as babies and, as one of the knowledgeable and polite sales staffer informs you, children up to 10 years of age (an anomaly, as Mothercare usually draws the line at 8-year-olds).

They claim they stock everything related to mothers and kiddies, and a stroll through this cheerful, brightly-lit and packed store leaves you with little doubt that they do. The display is divided into various sections, such as "bedding", but the supplies broadly fall under seven categories - maternity, baby and kids' fashion, travel, nursery, feeding, bath time and safety, and playtime.

In the maternity section, you can expect to find a sales lady happy to impart bra-fitting advice. It is quite difficult to find fashionable, well-finished maternity clothing in Hyderabad, but for women who want to look well-groomed throughout their pregnancy and later, Mothercare sells all kinds of garments - fashionable lingerie, pretty dresses, stretchable pants, clothing for exercise, nightwear - and a range of cosmetics, too.

Since there's no reason why your cherub cannot be a traffic-stopper like yourself, head to the kiddie clothing sections - there is no dearth of quality clothing here that will create little lady-killers and VIPs - Very Important Princesses.

As far as the rest of the stock is concerned, you find the usual odds and ends - bibs, toys, bottle-warmers, hypoallergenic bedding and shampoos, thermometers, child safety locks, blankets, adjustable cots - as well as a plethora of items, some marvellous, some marvellously useless, but all previously unknown to us strangers in baby land.

Among the more useful inventions is the Mothercare sunscreen lotion - you can directly spray the lotion onto the baby's skin. Any greenish rings (which will subside in minutes) will indicate that you have missed a spot.

This lotion, priced at Rs. 895 per medium-sized bottle, serves as a good indication of the store's pricing policies - Mothercare's products, though of very high quality, are not for the city's masses. One of the least expensive things I saw was a large car sticker that read "Cheeky baby on board", and at a cheeky Rs. 145, this item is certainly not going to be on a budget-shopper's list.

On the other hand, to be fair, the prices here seem to be at par with those of other similar stores in Hyderabad. For example, at Mom N Me, a pack of 4 diaper pins cost Rs. 135 when we last reviewed it.

Having said that, this store, though still in its infancy as we write this in July 2007, seems to be remarkably popular, judging by the number of parents strolling around on a weekday morning. Or maybe it owes its acclaim to the fact that apart from giving customers value for their money, this particular outlet also home delivers anywhere in Hyderabad, and also has a thick magazine catalogue available. And if you want a particular item which is not in stock, it will be readied in 10 days flat if an order is placed.

ADVERTISEMENT
This page was tagged for
mother care
Mother Care kids Store Hyderabad, Telangana
hyd mothercarejobs
mothercare city centre hyderabad ph no
mothercare tirumilghere
Follow @fullhyderabad
Follow fullhyd.com on
About Hyderabad
The Hyderabad Community
Improve fullhyd.com
More
Our Other Local Guides
Our other sites
© Copyright 1999-2009 LRR Technologies (Hyderabad), Pvt Ltd. All rights reserved. fullhyd, fullhyderabad, Welcome To The Neighbourhood are trademarks of LRR Technologies (Hyderabad) Pvt Ltd. The textual, graphic, audio and audiovisual material in this site is protected by copyright law. You may not copy, distribute, or use this material except as necessary for your personal, non-commercial use. Any trademarks are the properties of their respective owners. More on Hyderabad, India. Jobs in Hyderabad.