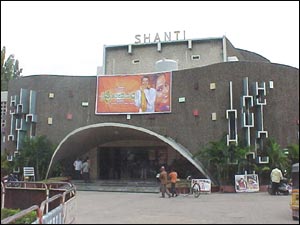 Ramakant D S / fullhyd.com
Situated in the heart of the city, Shanti lives up to the name and prestige it has carved for itself. And in case you happen to be a theater-owner who is ready to close shop, get in touch with the management of this one for some very valuable tips.

Set up in 1969, Shanti has been entertaining the audience with regular "family-fare". That is one of its major plus points. With the film-industry slump, Hyderabad's many theaters - like Shalimar at Ramkote, for instance - turned into marriage halls or started selling themselves to different managements. Shanti, on the other hand, stays in season by sticking to movies that appeal to everybody - the young and the old, the arty and the masses.

The first thing that would strike you on entering the premises are the premises themselves. The courtyard measures around 6,000 yards, and includes a neat bit of greenery. Which makes the congested parking lot a surprise. What's somewhat less surprising is the usual eight bucks for parking your bike.

Once inside, clean interiors replete with shiny tiling, mirrored walls and carpeted walkways welcome you. If the air-conditioning doesn't chill you during the movie, then the blaring acoustics surely will. Though the theater claims to support Digital DTS sound, the crowd generally walks away with a headache rather than memories of the movie. The morning show barely begins, when the indiscernible but so-much-in-love couple or the regular student gang from the neighbouring colleges drop in.

If Maheshwari is the baap of movie theaters in Hyderabad, we at fullhyd.com vote for Shanti as the son-in-law. Richly done, but always under the big guys' shadows.
Share. Save. Connect.
Tweet
SHANTI 70MM (NARAYANGUDA) SNAPSHOT
MOVIES AT SHANTI 70MM (NARAYANGUDA)
There are no movies at Shanti 70mm (Narayanguda) scheduled currently.
SHANTI 70MM (NARAYANGUDA) USER REVIEWS
1 - 10 OF 10 COMMENTS
POSITIVE  |  NEGATIVE |  NEWEST  |  OLDEST  |  MOST HELPFUL  |  LEAST HELPFUL
USER RATING
7.0
9 USERS
Comfort
Ambience
Cleanliness
Audio/Visual Quality
4.5
4.0
4.5
5.5
Good for date/family - Yes
Easy parking - Yes
Decent legroom - Yes
Sharat on 13th May 2019, 2:57pm | Permalink
Is couple seats available in u r theater
ASLAM SIDDIQUI on 1st Nov 2017, 8:28pm | Permalink
Picture quality is excellent eventhough it is not equipped with 2k projector.Rating 9/10.
Rushikesh on 27th Jan 2017, 7:37am | Permalink
Does this theatre have couple seats
ASLAM SIDDIQUI on 3rd Feb 2015, 9:01pm | Permalink
Vazrox thanks for the info.
ASLAM SIDDIQUI on 5th Jun 2014, 8:13pm | Permalink
watched manam at this fantastic theatre today.amazing picture clarity and great sound.can anyone clarify whether shanti has installed 2k projector becoz the picture quality was just excellent.
vazrox on 21st Dec 2014, 8:59pm | Permalink
Shanthi theater is equipped with a RAY luxon 1080p projection which produce very good visuals but it is not 2k.
mahesh on 25th Jan 2014, 5:51pm | Permalink
for advance booking in this theatre sms movie name,date ,showtime to 7842479321. ur tickets will be reserved. only ticket cost will be collected no extra money.
SB on 19th Nov 2013, 12:58pm | Permalink
There is a railing which blocks the screen view especially if you sit in the first row (Row M ,I think) of Rs.60 seating hall.This is why i hate going to this theatre as i had the bad experience of sitting in this row.Obviously,this problem projects a very cheap image of the theater management.I hope atleast now the managament wakes up to rectify this problem.
harish on 10th Feb 2013, 10:53am | Permalink
I have mirchi 4 tickets in Santhi theater narayanaguda Hyderabad... Day 10-02-13 Timings 9.15pm...... Any body want call me......Ticket cost 55/-

ADVERTISEMENT
This page was tagged for
Santhi narayaguguda hyd runing move
Shanthi theatre narayanguda contact no
shanti theter narayanaguda
shanti theatre bangalore
shanti theatre narayanaguda owner
Follow @fullhyderabad
Follow fullhyd.com on
About Hyderabad
The Hyderabad Community
Improve fullhyd.com
More
Our Other Local Guides
Our other sites
© Copyright 1999-2009 LRR Technologies (Hyderabad), Pvt Ltd. All rights reserved. fullhyd, fullhyderabad, Welcome To The Neighbourhood are trademarks of LRR Technologies (Hyderabad) Pvt Ltd. The textual, graphic, audio and audiovisual material in this site is protected by copyright law. You may not copy, distribute, or use this material except as necessary for your personal, non-commercial use. Any trademarks are the properties of their respective owners. More on Hyderabad, India. Jobs in Hyderabad.