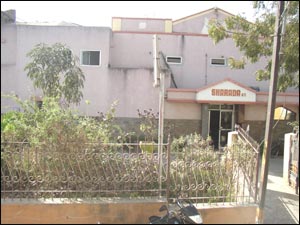 Prasheel Anand / fullhyd.com
EDITOR RATING
3.0
Comfort
Ambience
Cleanliness
Audio/Visual Quality
3.0
3.0
3.0
3.0
Suggestions
Good for date/family
NA
Easy parking
NA
Decent legroom
NA
The only reason that Sharada 35mm should be preferred over other theaters specializing in screening A-rated movies is the ambience that it provides. Only Glory at Mallepally and Lamba at Secunderabad would give Sharada a run for its money in terms of popularity.

Located adjacent to the Saroor Nagar Tank Bund, this theater apparently runs housefull shows every week. When ardent movie watchers of this area enjoy a prerogative which other hall owners fail to provide. Even Mithun Chakravarty's movies probably get outstanding responses.

The hall is very viewer-friendly. Primarily, the films that are screened here are all part of the contingent that missed the Academy Awards by a whisker. Seriously, ever heard of "Baat Bani Raat Bani", "Gupt Rog", "Sunday Ka Funda" etc? A mere handful of the staggering collection of spicy films that almost ended up winning the Masala Movie Of The Year award at the Oscars. Better luck next time.

The management has taken extensive care to provide portable loos. Shocked? That was exactly my reaction when I saw viewers relieve themselves everywhere around the theater except in the area intended for that purpose. Well, here in Hyderabad, forcing people to pee in the loos is a curtailment of their basic human rights.

Of course, there are a few films that are bereft of audiences in the second half, mainly because all the raunchy scenes have run their course in the first half. If you're bored, too, you can get back to the arrack store neighboring the hall and douse yourself in Gudumba (a local intoxicant) and wait for the next show to begin.
Share. Save. Connect.
Tweet
SHARADA 35MM (SAROORNAGAR) SNAPSHOT
MOVIES AT SHARADA 35MM (SAROORNAGAR)
There are no movies at Sharada 35mm (Saroornagar) scheduled currently.
SHARADA 35MM (SAROORNAGAR) USER REVIEWS
1 - 6 OF 6 COMMENTS
POSITIVE  |  NEGATIVE |  NEWEST  |  OLDEST  |  MOST HELPFUL  |  LEAST HELPFUL
USER RATING
1.0
2 USERS
Comfort
Ambience
Cleanliness
Audio/Visual Quality
1.0
1.0
1.0
1.0
Good for date/family - No
Easy parking - Yes
Decent legroom - Unsure
Rainbow on 3rd Nov 2018, 3:57am | Permalink
I have no comments about others views and opinions but i personally liked that theatre as it gives full entertainment on cheap ticket rates . It is nothing to blame as in the current scenario even girls are watching porn on their mobiles !
Md Rustam Parwez on 21st Oct 2019, 7:44pm | Permalink
Can you please tell me show times if you are sure
Vumesh970 on 6th Jul 2018, 7:33am | Permalink
Waste theatre in the hyderabad spoiling public life
Ramesh on 6th Jul 2018, 7:14am | Permalink
Frnds e theatre ki vellakandi indhulo ekkuvaga gay sexual activities jaruguthuntay gents ye sexual activies cheskuntaru they are spreading hiv and aids nenu teliyaka chesina thappuki shiksha anubahavistunna
Saroornagarboy on 21st May 2017, 6:59pm | Permalink
Working for this theater almost 15years by my father was bread and butter and still remember he use to come home aftr closing the theater at 2pm. I really have life time memories visiting this theater at childhood. They used to release new films also in those days like chiranjeevi Anaya etc...

I now left the country for many years and not sure whether this cinema is operating
Stalin on 3rd Jan 2014, 9:22pm | Permalink
The guy who wrote the review was 100% accurate , about the theatre and the movies .
vasuicon on 4th Aug 2011, 1:06am | Permalink
Cheaper might be the reason why it is still running..(Rs 20/ Rs 15/ Rs 7) When I saw picture recently here.. as usual people are shouting for the 'inserts' what the theater shall do for any movie that are taken from other English (A+) films. Most of the people will leave the theater by interval..as most of the 'scenes' come before it.

ADVERTISEMENT
This page was tagged for
hyderabad lamba theatre gays
saroornagar theaters sharada
Sharadha dhiatar sarornagar timings
saroor nagar sharada theatre current movie
sharada theater saroornagar timings
Follow @fullhyderabad
Follow fullhyd.com on
About Hyderabad
The Hyderabad Community
Improve fullhyd.com
More
Our Other Local Guides
Our other sites
© Copyright 1999-2009 LRR Technologies (Hyderabad), Pvt Ltd. All rights reserved. fullhyd, fullhyderabad, Welcome To The Neighbourhood are trademarks of LRR Technologies (Hyderabad) Pvt Ltd. The textual, graphic, audio and audiovisual material in this site is protected by copyright law. You may not copy, distribute, or use this material except as necessary for your personal, non-commercial use. Any trademarks are the properties of their respective owners. More on Hyderabad, India. Jobs in Hyderabad.