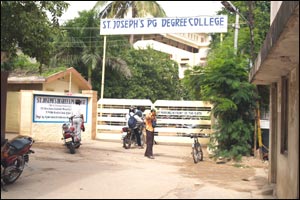 Priyanka Pulla / fullhyd.com
St. Joseph's College has a crackling new and sunny facade, the kind of building that would make you bright and wakeful once you enter every morning. Clean and white like new notepaper, its walls are as beamy as its energetic students. You will catch a boisterous bunch of them shooting the hoop if you walk in sometime post-lunch.

St. Joseph's has everything a proper college life should have - a nice little outdoor canteen that sells samosas, puffs, coffee and ice-cream; a couple of shady trees with circumscribing benches on which students sit and go yappity-yap; and a parking lot, demarcated by year and packed with gleaming Pulsars, Activas and Hondas. And to top it all, the college is co-educational! Now you know where Tollywood movies get the inspiration for their college flicks.

However, there isn't too much time for kids from Joseph's to indulge in Tollywood style gallivanting. That's because the attendance law has been passed in this school, too. They have what is called 'Central Attendance'. No, it's not something sophisticated like centralized warehousing or ERP, but just a roll call at the start of the day. And then there is a roll call for every period. And if you are in after ten minutes of class starting, you win yourself unasked leave for the day.

But you still get to do lots of stuff apart from studies. St. Joseph has produced Boxing, Judo and Karate champions, and those who are not busy winning medals, still play a bunch of games like Cricket (in the St. Philips field next door that they have access to), Carroms, TT and so on.

The girls unfortunately keep away from the fields generally, 'cause the boys are already slamming away there. St. Joseph's has only a 30%-35% female population, a trend that runs across most undergraduate co-eds in Hyderabad today.

The students seem pretty contented with the placement scene, with Wipro, Satyam, Dell and Delta coming for Computer Science graduates, and BPOs like Delloitte and GE coming for the commerce stream.

To top it all, they provide extension services for the Centre for Social Transformation. Nearly 40% of the students of St. Joseph's voluntarily contribute to it - whether it means distributing groceries in slums or adopting a home for the aged.

One of the biggest advantages of a co-ed school is a much richer pool of qualifications to pick faculty from, since they don't try exclusively to get faculty of a single gender. So St. Joseph's boasts faculty with experience in the industry as well as bigger and better educational pedigrees.

ADVERTISEMENT
This page was tagged for
st joseph college hyderabad kingkoti timings
st. joseph contact no degree college king koti
st joseph degree college in bangalore images
koti white girls plz
st joseph's junior college king koti
Follow @fullhyderabad
Follow fullhyd.com on
About Hyderabad
The Hyderabad Community
Improve fullhyd.com
More
Our Other Local Guides
Our other sites
© Copyright 1999-2009 LRR Technologies (Hyderabad), Pvt Ltd. All rights reserved. fullhyd, fullhyderabad, Welcome To The Neighbourhood are trademarks of LRR Technologies (Hyderabad) Pvt Ltd. The textual, graphic, audio and audiovisual material in this site is protected by copyright law. You may not copy, distribute, or use this material except as necessary for your personal, non-commercial use. Any trademarks are the properties of their respective owners. More on Hyderabad, India. Jobs in Hyderabad.