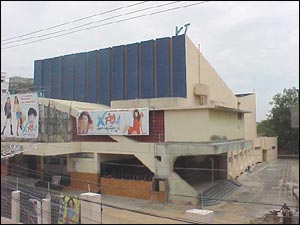 Ramakant D S / fullhyd.com
There are good theaters and there are bad theaters. Then there are theaters that remain in the middle of the competition and wouldn't bother about moving from there. But the problem with Venkatesa is that not it won't move, but that it doesn't let others get ahead. In the literal sense, that is. Located at Narayanguda right next to the flyover, Venkatesa 70mm and Srinivasa 35mm are the cause for many a traffic jam in the area.

Established in 1978, this theater along with the younger sibling has become a regular haunt for the middle-class Telugu audience. Venkatesa screens the regular low-budget, average running films. The air-conditioning isn't always on, but the excuse given is highly diplomatic: "Isn't the weather outside rather cold?" Wonder what the reply would have been to the stinking toilets.

The interiors probably haven't changed in the past 15 years, and judging by the movies playing, it seems like it'd take another 15 years for the next renovation. Though much cannot be written about the surroundings, the parking is spacious, albeit with an eight-buck ticket. Venkatesa caters to the masses as well as to the family crowds. Give it a miss if you're looking for any quality fare.

They used to play new releases a few years ago.

ADVERTISEMENT
This page was tagged for
venkateshwara70mm narayanagida
venkatrama Narayanguda Hyderabad theatre
narayanaguda 70mm theaters
Venkatesha 70MM Theatre
sudha theatre hyd
Follow @fullhyderabad
Follow fullhyd.com on
About Hyderabad
The Hyderabad Community
Improve fullhyd.com
More
Our Other Local Guides
Our other sites
© Copyright 1999-2009 LRR Technologies (Hyderabad), Pvt Ltd. All rights reserved. fullhyd, fullhyderabad, Welcome To The Neighbourhood are trademarks of LRR Technologies (Hyderabad) Pvt Ltd. The textual, graphic, audio and audiovisual material in this site is protected by copyright law. You may not copy, distribute, or use this material except as necessary for your personal, non-commercial use. Any trademarks are the properties of their respective owners. More on Hyderabad, India. Jobs in Hyderabad.