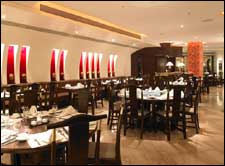 Piya Bahadur / fullhyd.com
The Scene
Conveniently located at the City Center Mall (you almost cannot get more central than that on a Hyderabad map that features upmarket eatouts), and with a pedigree to boot - BJN just happens to manage some of the most well-reputed restaurants in both Bangalore and Hyderabad - Aromas of China looks like it has its basics down pat.

The experience begins right at the door, where you have to literally walk over water in order to dine at this reasonably-sized restaurant, done in dignified blacks and browns, that can seat about 160 diners. It boasts its own bar with ample stock, with Firangi Paani, BJN's own exclusive watering hole, next door as the back-up plan.

The Food
Predominantly Cantonese and Shanghai, the fare begins with dimsums and soup, meanders through entrees, rice and noodles, and ends sumptuously with desserts. While ordering the dimsums (Rs. 85 for 6 pieces), the diner is bound to be intrigued by the part that reads 'imported'. The imported tag is attached to the non-spicy, onion and gingerless version of the Indian-ized one... perhaps the reference then is to the authenticity of the diner than to that of the product being consumed?

Xenophobia apart, the Chicken Sumai from the dimsums steam box, whether imported or desi, is worth a dekko, as is the Lat Mai Kai. For the vegetarians, the restaurant does a wonderful Baby Corn, Broccoli and Shitake Mushroom in Hunan Chili Sauce, at Rs. 135. One of the things the hosts should mention is that they can pretty much mix-and-match most of the sauces and vegetables and meats to your individual taste. This, however, is a classic case of where you must be sure of exactly what you might be asking for.

The Verdict
The couple of proverbial thorns in this restaurant's side would be the hugely successful Mainland China, the old Hyderabadi favorite Nanking, and the new Hyderabadi favorite Chinese Pavilion. Unfortunately, both Mainland China and Chinese Pavilion are threateningly close as far as location, ambience and fare are concerned. Which one ultimately does better than the others is in the hands of those capricious gods of Chinese restaurants.
Share. Save. Connect.
Tweet
AROMAS OF CHINA SNAPSHOT
EVENTS AT AROMAS OF CHINA
There are no events at Aromas Of China scheduled currently.
AROMAS OF CHINA USER REVIEWS
1 - 1 OF 1 COMMENTS
POSITIVE  |  NEGATIVE |  NEWEST  |  OLDEST  |  MOST HELPFUL  |  LEAST HELPFUL
USER RATING
6.3
3 USERS
Food
Service/Courteousness
Ambience
Value For Money
7.5
7.0
8.0
7.5
Good for date/family - Yes
Easy parking - Yes
Long waiting - No
amkis Verma on 11th May 2009, 11:55pm | Permalink
We went to aromas of China accidentally. The accident was pleasant. Amazing food, Great ambience and value for money. The prices are reasonable and the quantity is great. And the taste...ummmmm... am looking forward to being there again

ADVERTISEMENT
This page was tagged for
www.chickensumai
waterfront restaurant hyderabad
contact number of Aromas of China Banjara Hills, Hyderabad
images of aromas of china
aromas of china hyderabad phone
Follow @fullhyderabad
Follow fullhyd.com on
About Hyderabad
The Hyderabad Community
Improve fullhyd.com
More
Our Other Local Guides
Our other sites
© Copyright 1999-2009 LRR Technologies (Hyderabad), Pvt Ltd. All rights reserved. fullhyd, fullhyderabad, Welcome To The Neighbourhood are trademarks of LRR Technologies (Hyderabad) Pvt Ltd. The textual, graphic, audio and audiovisual material in this site is protected by copyright law. You may not copy, distribute, or use this material except as necessary for your personal, non-commercial use. Any trademarks are the properties of their respective owners. More on Hyderabad, India. Jobs in Hyderabad.