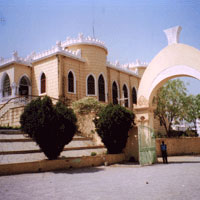 Deepa Menon / fullhyd.com
We could all stand to learn a few lessons from the older generations, especially the kingly ones. Despite a hectic schedule of conquering, destroying, scheming and pillaging, they found the time for random acts of mindless violence, like big-game hunting. They took off for god-forsaken lands, gave up all pretense of civilization, and lived like bloodthirsty barbarians. In fully-furnished, luxurious villas. With servants, cooks and little brown boys to operate the punkahs. Ain't life grand when you're the king?

So when Sir Asman Jah built the fort that bore his name in 1885, he just thought of it as a picturesque mansion to bring his gaming buddies and other important statesmen (he was Prime Minister of the State for a while). But the beautiful palace drew attention for more than just being a pleasant place to hang out at. The architecture is extremely Gothic, and the fort is at once grandiose and completely serene. You can see why it was a favorite with the lords and the ladies.

When Asmangarh changed hands and came into the Nizams' family, there was a small addition by way of a turban-shaped gateway to mark tribute to the seventh Nizam, Mir Osman Ali Khan, who initially considered using the palace to house the Osmania University.

Now the Asmangarh Fort shares its neighbourhood with a TV tower, and has children running up and down its magnificent corridors. St Joseph's Public School takes care of this endangered heritage monument, and in turn the rambling fort lets the little brats rampage around its vastness, finding hiding places and secret spots that haven't been stirred for ages.

Note: If you want to visit Asmangarh Fort, you will need to take permission from the King Kothi branch of the School at 2323-5665.
Share. Save. Connect.
Tweet
ASMANGARH FORT SNAPSHOT
EVENTS AT ASMANGARH FORT
There are no events at Asmangarh Fort scheduled currently.
ASMANGARH FORT USER REVIEWS
1 - 2 OF 2 COMMENTS
POSITIVE  |  NEGATIVE |  NEWEST  |  OLDEST  |  MOST HELPFUL  |  LEAST HELPFUL
USER RATING
4.0
1 USER
Quality
Service/Courteousness
Value For Money
4.0
5.0
4.0
nithi on 15th Apr 2013, 5:00pm | Permalink
Thanks for sharing the post...
Despite a hectic schedule of conquering, destroying, scheming and pillaging, they found the time for random acts of mindless violence, like big-game hunting.Next week i visit this place for that we Book Bus Tickets through ticketgoose.com.

ADVERTISEMENT
This page was tagged for
malkpet fort
st.joseph mosarambagh
malakpet tourist
St joseph's public school asman garh phone number
st joseph's public school king koti hyderabad
Follow @fullhyderabad
Follow fullhyd.com on
About Hyderabad
The Hyderabad Community
Improve fullhyd.com
More
Our Other Local Guides
Our other sites
© Copyright 1999-2009 LRR Technologies (Hyderabad), Pvt Ltd. All rights reserved. fullhyd, fullhyderabad, Welcome To The Neighbourhood are trademarks of LRR Technologies (Hyderabad) Pvt Ltd. The textual, graphic, audio and audiovisual material in this site is protected by copyright law. You may not copy, distribute, or use this material except as necessary for your personal, non-commercial use. Any trademarks are the properties of their respective owners. More on Hyderabad, India. Jobs in Hyderabad.