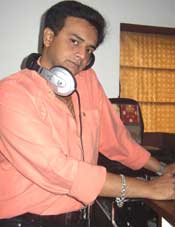 Charisma Murari / fullhyd.com
This writer's MPD manisfests itself in many ways - hostile lunatic (don't tick her off), raving psychophant (ask the boss - he is never wrong), incredible beauty (don't believe that? she did say 'incredible') and a woman of few words (yeah, right!). Anyway, the deal is that the conflicting alter egos do not agree. And that is the whole point of being conflicting. And Dr. Phil is outta town.

So we did the next best thing. We hooked up with Dr. DJ Amit. He drowned all the noise in our head by drowning the ears in all kinds of pleasing noises. Woo hoo, oxymoron. The dude is the crown prince of Hip-Hop, the whole duniya loves him for it. And he loves East Coast for it. Even when it comes to Progressive House, he is a class act.

Amit's been DJing for 15 years! And Hyderabad has dominated his priority for the last 5 of those. After playing at Calcutta, Chennai, Mumbai, Chandigarh, Delhi... well, all over the place, he found Hyd and succumbed to its charms. And now he's started his own club, Equinox, right here.

He predicts the return of the 80s kinda music, and staunchly believes that Hindi remixes, though crowd magnets, are but ephemeral. Amen! Any new music released in the US or UK is promptly shipped off to him and he has a knack for slipping them in his routine discreetly.

ADVERTISEMENT
This page was tagged for
djamit ngo
Dj Amit Banjara
dj amit atlanta
amit/dj
dj,amit
Follow @fullhyderabad
Follow fullhyd.com on
About Hyderabad
The Hyderabad Community
Improve fullhyd.com
More
Our Other Local Guides
Our other sites
© Copyright 1999-2009 LRR Technologies (Hyderabad), Pvt Ltd. All rights reserved. fullhyd, fullhyderabad, Welcome To The Neighbourhood are trademarks of LRR Technologies (Hyderabad) Pvt Ltd. The textual, graphic, audio and audiovisual material in this site is protected by copyright law. You may not copy, distribute, or use this material except as necessary for your personal, non-commercial use. Any trademarks are the properties of their respective owners. More on Hyderabad, India. Jobs in Hyderabad.