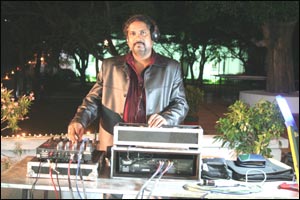 Charisma Murari / fullhyd.com
Paul's the kinda guy who will really crack you up. He likes inducing shocks that tickle the ribs, he loves goofing around - just playing the fool - and he is a god with the mike.

Best of all? He's your Joe who's really 'been there done that'. He has been in showbiz since 1986, doing pretty much everything. He started off as a dancer, then moved on to event management, which eventally turned out to be the inspiration for turning DJ. Compelling reason? The all-consuming need to find one DJ who'd be available at his beck and call. Hmm, smart solution.

And when it comes to music, his abracadabra is charmed! He'll play anything it takes to get the crowd going. And he will take the crowd anywhere it wants to go. But left to his devices, he will dole out an awesome treat of classic and new-age rock.

To Paul, music is a mood-elevator/performance enhancer. He loves Billy Joel and Dire Straits - in fact he swears by Sultans Of Swing. He is a man who will stop at nothing to get his hands on new music. When we asked him how he does that, pat came the reply: "Beg, borrow or steal." Hmm, his stock just skyrocketed!

Paul's now the most wanted guy at Easyrider. He has DJed at Outswinger, Underdeck, 99 Megahertz and Ten Downing Street.

If you are looking for a night of unbridled fun with great music and a cool dude attitude, give Paul a call. Heh heh.
Share. Save. Connect.
Tweet
DJ PAUL SNAPSHOT
EVENTS AT DJ PAUL
There are no events at DJ Paul scheduled currently.
DJ PAUL USER REVIEWS
1 - 3 OF 3 COMMENTS
POSITIVE  |  NEGATIVE |  NEWEST  |  OLDEST  |  MOST HELPFUL  |  LEAST HELPFUL
USER RATING
9.8
4 USERS
Friendliness
Musical Knowledge
Creativity
Value For Money
9.2
9.8
9.2
9.2
C.F. on 5th Jan 2013, 11:52pm | Permalink
Paul is an awesome DJ. He stole my heart with his music. I heard him play at 10D and I was a goner. He is a one man show. He also has the moves and he dances with such grace and sexiness! There is a certain oomph that only he can exert!!

You are an awesome Dj Paul. Kudos to you!
Sangeeta on 28th Aug 2008, 3:28pm | Permalink
Paul.. well I have known him for about 3 years now.... Heard great reviews about him, esp when I went to Hookah in Mysore. He can steal heart.. so all you ladies out there.. watch out. Paul You Rock. Keep it up.

ADVERTISEMENT
This page was tagged for
https://yellowpages.fullhyderabad.com/dj-paul/padmarao-nagar/telephone-email-address-reviews/djs-529-1.html
pjspaul reali mape
PjS paul sunday services in hyd
pjs paul addres mehendipatnam
pjs paul address in secundrabad sunday service
Follow @fullhyderabad
Follow fullhyd.com on
About Hyderabad
The Hyderabad Community
Improve fullhyd.com
More
Our Other Local Guides
Our other sites
© Copyright 1999-2009 LRR Technologies (Hyderabad), Pvt Ltd. All rights reserved. fullhyd, fullhyderabad, Welcome To The Neighbourhood are trademarks of LRR Technologies (Hyderabad) Pvt Ltd. The textual, graphic, audio and audiovisual material in this site is protected by copyright law. You may not copy, distribute, or use this material except as necessary for your personal, non-commercial use. Any trademarks are the properties of their respective owners. More on Hyderabad, India. Jobs in Hyderabad.