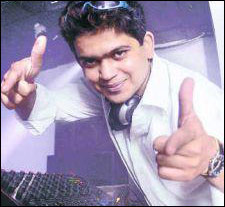 Charisma Murari / fullhyd.com
Have you ever felt thwarted by the Bollywood numbers playing-Godzilla? Or asphyxiated by the monotony of Hindi remixes? Or just had one of those plain old-fashioned moments where you've said, "Aaagh! Enough! I just wanna listen to something new and different!"? Hmm... then say hello to DJ Yogi, for he is a man after your own heart.

Yeah, DJ by night, Dog-person and Chartered Accountant by day, Yogi's claim to blame is Commercial House. Milk & Sugar, and Styke & Suggarstar - the man seems to have a sweet tooth for good music. An MBA from ICFAI has taught him the importance of great packaging. That explains his fetish for ensuring that the presentation of all his new music is just right. And the man makes it a point to have an ammo of some kickass music by having stockpiles shipped across from all over the world.

Guitarist, tabla player, businessman, DJ - yeah, he is seeking treatment for MPD. But his has been an intriguing journey - simultaneously prosaic and inspiring. A modest beginning behind a pal's ended up being the start of a voyage to Pyramids, Passport, Sparks, TI, Touch and a lot of other clubs around the Indian terrain, and some on the Indian coasts in Goa and Mumbai.

ADVERTISEMENT
This page was tagged for
dj yo yogi
dj yogi hyderabad
dj yogi
flat no.-401,gharondasriniketan apartments, street no.-11,himayath nagar,hyderabad-500029
Himayathnagar Djs
Follow @fullhyderabad
Follow fullhyd.com on
About Hyderabad
The Hyderabad Community
Improve fullhyd.com
More
Our Other Local Guides
Our other sites
© Copyright 1999-2009 LRR Technologies (Hyderabad), Pvt Ltd. All rights reserved. fullhyd, fullhyderabad, Welcome To The Neighbourhood are trademarks of LRR Technologies (Hyderabad) Pvt Ltd. The textual, graphic, audio and audiovisual material in this site is protected by copyright law. You may not copy, distribute, or use this material except as necessary for your personal, non-commercial use. Any trademarks are the properties of their respective owners. More on Hyderabad, India. Jobs in Hyderabad.