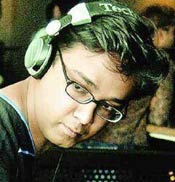 Charisma Murari / fullhyd.com
He is a good kind of bad. His music is evil as sin. And he makes you lose all those inhibitions, leaving you totally vulnerable to great music. Off with his head! How dare he spread the party-contagion? We'll admit it; we're addicted. Wonder if they have rehabs for this.

DJ Piyush is the drug in question, and his claims to blame are Club, Progressive House and Trance. He just adores the Safri Duo, and is a self-proclaimed sucker for retro music. But the man is a people-person - he takes very little time to pick up on what the crowd wants to hear, and then puts on a show like no other. You can catch him at Bottles And Chimney, playing a different kind of tune every night of the week.

There is one heck of a story behind his initiation into DJdom. After high school he found himself with six months to kill. So, as a hobby, he just picked up on this craft. One thing led to another, and bam, the DJ in him was unleashed!

He started out with private dos, graduated to Pyramids, Spanish Fly and Where Else, among others, and now hops around the country doing what he does best. And the man has a way with words! You should catch him introducing new music (and he sure has a lot of that, most of which comes in from the UK). He throws in these nuggets of music-news, and you always learn something new.

ADVERTISEMENT
This page was tagged for
dj piyush contact
dj piyush mobile number
dj piy ush psy
dj Piyush player
dj piyush contact no
Follow @fullhyderabad
Follow fullhyd.com on
About Hyderabad
The Hyderabad Community
Improve fullhyd.com
More
Our Other Local Guides
Our other sites
© Copyright 1999-2009 LRR Technologies (Hyderabad), Pvt Ltd. All rights reserved. fullhyd, fullhyderabad, Welcome To The Neighbourhood are trademarks of LRR Technologies (Hyderabad) Pvt Ltd. The textual, graphic, audio and audiovisual material in this site is protected by copyright law. You may not copy, distribute, or use this material except as necessary for your personal, non-commercial use. Any trademarks are the properties of their respective owners. More on Hyderabad, India. Jobs in Hyderabad.