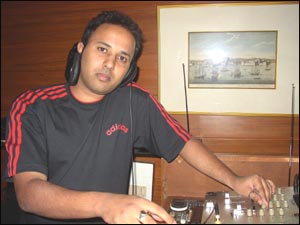 Charisma Murari / fullhyd.com
Shekhar's your man if you are looking for music but do not know what music you are looking for. Okay, so that probably sounds like a job for a shrink. But Shekhar is a magician who leads you, skillfully, through a trip of rock and retro, down the alleys of hip-hop, commercial and club, till you have had all you can take for one night. Then you cannot wait to come back the next night, and the night after that, and the one after that, and... ah, you get the drift.

He's your what-you-can-call-it guy when it come to music. He'll play anything you want. Left to his devices and whims, he will dole out Wycleaf Jean, Jamilia, Snoop Doggy dog and other hip-hop artists. But he'll play indipop, Hindi phillum music, rock and pop with even panache. He loves listening to Duran Duran and Eric Prydz, and a little bit of Nirvana and Morrison is all it takes to keep him hap-hap-happy.

His initiation into DJdom happened in parallel with his initiation into manhood from boyhood. Really. He started out in class X, and one fine day found himself On The Rocks, then buzzed around at Spanish Fly, and finally went over at Underdeck!

ADVERTISEMENT
This page was tagged for
dj sekhar subodh ke nambar
Shekar DJ Sounds Hyderabad, Telangana
dj shekhar raj culb.com
DJ Shekhar
dj sekhar
Follow @fullhyderabad
Follow fullhyd.com on
About Hyderabad
The Hyderabad Community
Improve fullhyd.com
More
Our Other Local Guides
Our other sites
© Copyright 1999-2009 LRR Technologies (Hyderabad), Pvt Ltd. All rights reserved. fullhyd, fullhyderabad, Welcome To The Neighbourhood are trademarks of LRR Technologies (Hyderabad) Pvt Ltd. The textual, graphic, audio and audiovisual material in this site is protected by copyright law. You may not copy, distribute, or use this material except as necessary for your personal, non-commercial use. Any trademarks are the properties of their respective owners. More on Hyderabad, India. Jobs in Hyderabad.