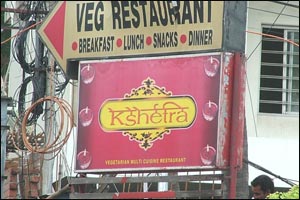 C Venkatesh / fullhyd.com
EDITOR RATING
3.0
Food
Service/Courteousness
Ambience
Value For Money
3.0
3.0
3.0
3.0
Suggestions
Good for date/family
NA
Easy parking
NA
Long waiting
NA
The Scene
Sprawling languidly behind the bustle and hustle of the Eenadu building, set back from the obstreperous traffic, lies the club-like Rockdale Building, home to Kshetra. Club-like in its patio, in its quaint steps, in its wrought-iron chairs that lie neglected in the yard, in its spiral staircase. And club-like, in that you need to clap your hands and conjure up a contemporary and politically-correct equivalent of koi-hai to draw attention from the waiters.

The Food
The best that can be said is that the portions are very generous in their size.

The menu of Kshetra, when it reaches you, shows signs of the long and arduous journey, covered as it is with sundry notes made by earlier customers. Crosses next to some dishes may reflect wishful thinking, or perhaps just idle doodles. The menu is aggressively multi-cuisine. Yang Chow Rice and Szechuan Rice huddle demurely below various types of Noodles and Vegetables Manchurian (which, by the way, are medium rare). Idlis and Dosas glower from the "Snacks" page. Rava Kesari patiently waits, nestled among more mainstream desserts.

Kshetra offers vegetarian food only, as most Udupi restaurants do, but it's not the best of that breed. It takes desultory stabs at satisfying diners who're larger in number than the fare would lead you to expect. The prices are in the value-for-money class, but most self-respecting Udupi restaurants serve far better food at comparable prices.

"Go purloin a sirloin my pet, If you'd win a devotion incredible / And asparagus tip vinaigrette, Or anything else that is edible." Locational circumstances eliminate sirloin and asparagus. The chef, such as he is, takes a manful stab at anything else edible, claiming expertise at fare as diverse as Mexican, Italian, Continental, Chinese and Indian. His artistic endeavours go beyond charted territory, leading to dishes that would have made Dali proud. "Vegetarian Kheema", for one. Don't ask what goes in to the "Clinton Kofta". The maitre'd, if asked, will reveal off-menu dishes, such as the strangely named Mushroom Moti Kabab.

The best that can be said is that the portions are very generous in their size. They're also overly generous in their use of various condiments, in what must be a jingoistic effort to draw your attention to the proximity of Udupi to the Malabar Coast. Perhaps, on the other hand, he's been paying too much attention to Roget, who lists "muckamuck" as a synonym for "food".

There's an air-conditioned area on the ground floor, with what passes for a convention center upstairs. Set as it is on a lovely building, in an area that's swarming with offices and office-goers, this could make a first class restaurant if managed better.

ADVERTISEMENT
This page was tagged for
Kshetra Vegetarian Restaurant Hyderabad, Telangana
kshetra veg restaurant hyderabad to day
kairathabad kshethra veg restaurant
kshetra restaurant somajiguda
Kshetra Services in Hyderabad
Follow @fullhyderabad
Follow fullhyd.com on
About Hyderabad
The Hyderabad Community
Improve fullhyd.com
More
Our Other Local Guides
Our other sites
© Copyright 1999-2009 LRR Technologies (Hyderabad), Pvt Ltd. All rights reserved. fullhyd, fullhyderabad, Welcome To The Neighbourhood are trademarks of LRR Technologies (Hyderabad) Pvt Ltd. The textual, graphic, audio and audiovisual material in this site is protected by copyright law. You may not copy, distribute, or use this material except as necessary for your personal, non-commercial use. Any trademarks are the properties of their respective owners. More on Hyderabad, India. Jobs in Hyderabad.