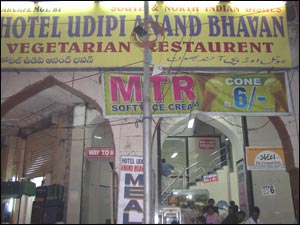 Ghazala Rizvi / fullhyd.com
EDITOR RATING
8.0
Food
Service/Courteousness
Ambience
Value For Money
9.0
7.0
5.0
NA
Suggestions
Good for date/family
NA
Easy parking
NA
Long waiting
NA
The Scene
Walking up the winding staircase of New Udipi Anand Bhavan is a Hyderabadi ritual, second only to climbing up the minars of the Charminar - you've seen it once, been there, done that, but you keep going back for second helpings.

No awkward silences or tentative gestures between you and the waiters - whatever Anand Bhavan has, in the true sense of hospitality, is laid bare for you. So unpretentious is the ambience that you might end up at the same table as your autowaala. You'll find yourself sharing elbow space with a motley of multi-colored and multi-ethnic junta which proliferates abundantly under the Charminar and swarms the narrow bylanes of Lad Bazaar.

Anand Bhavan buzzes with heated conversations and laughter. Occasionally, plates falling on the ground raise some tumult, and are followed by some frenetic retrieval activity by the staff. But all in all, once seated, you can relax, and give in to the din around you or retreat into your own thoughts, as you are not even required to swat your own flies. Anand Bhavan has its own swatters, as it has its army of cleaners and waiters in different degrees of... waiting. Hungry Joes, and Janes in Burqas, will be eyeing you all through your meal - for once, not because you are too gorgeous to be for real, but to pounce on the scrubbed wooden table on perceiving in you the slightest inclination to leave.

The Food
Chefs don their aprons for a variety of reasons - money, free food, nagging wife at home... - but at Anand Bhavan, they do it because it's their religion. It's no award-bedecked affair, but you'll be awed by the simplicity yet the sumptuousness of the food that can be had in a paltry sum of Rs. 27. Basically a tiffin joint, the restaurant serves North-Indian and South-Indian meals in addition to the large variety of dosas, uttapams and chats.

Anand Bhavan's Special Idli, sauted lightly in desi ghee and accompanied with red sauce, sets the pace for the day. With Onion Dosa and a plate of Mysore Bajji, and a serving of un-Mumbai Pav Bhaji, the breakfast is quickly converted into a brunch. Mouth-watering, scrumptious, delicious... such adjectives get an added flavor due to the low prices.

The Verdict
After sampling exotic cuisine like the Lebanese Mattalaba (glorified baigan ka bharta) and Japanese Steak (chicken leg piece in kaccha andaa) at atrocious prices in the numerous restaurants that have recently mushroomed around town, there are reasons enough for you to try Anand Bhavan. While not regretting your decision, you'll nevertheless be ashamed to pay so less for feeling so fulfilled.
Share. Save. Connect.
Tweet
NEW UDIPI ANAND BHAVAN SNAPSHOT
EVENTS AT NEW UDIPI ANAND BHAVAN
There are no events at New Udipi Anand Bhavan scheduled currently.
NEW UDIPI ANAND BHAVAN USER REVIEWS
1 - 2 OF 2 COMMENTS
POSITIVE  |  NEGATIVE |  NEWEST  |  OLDEST  |  MOST HELPFUL  |  LEAST HELPFUL
USER RATING
10
2 USERS
Food
Service/Courteousness
Ambience
Value For Money
10.0
10.0
10.0
10.0
Good for date/family - Yes
Easy parking - Yes
Long waiting - No
skanth on 18th Sep 2009, 11:17am | Permalink
Great taste in 'south Indian foods' in Hyderabad. Don't miss it....
rbellary on 18th May 2009, 4:51pm | Permalink
I went to this hotel with my family. The food was very very tasty with highest quality and especially Dosa was awesome. You will not get this kind of Dosa in Hyderabad and it is really to worth to eat it. You will become regular customer once you eat here for the exotic taste and value for money.

ADVERTISEMENT
This page was tagged for
anand bhavan afzalgunj
www.anandbhavan.com
anandha bhavan hyderabad paradise opposite hdfc bank atm, paradise circle (5.5km)
anandha bhavan hyderabad paradise
Special Anand Bhuvan Restaurant, mumbai
Follow @fullhyderabad
Follow fullhyd.com on
About Hyderabad
The Hyderabad Community
Improve fullhyd.com
More
Our Other Local Guides
Our other sites
© Copyright 1999-2009 LRR Technologies (Hyderabad), Pvt Ltd. All rights reserved. fullhyd, fullhyderabad, Welcome To The Neighbourhood are trademarks of LRR Technologies (Hyderabad) Pvt Ltd. The textual, graphic, audio and audiovisual material in this site is protected by copyright law. You may not copy, distribute, or use this material except as necessary for your personal, non-commercial use. Any trademarks are the properties of their respective owners. More on Hyderabad, India. Jobs in Hyderabad.