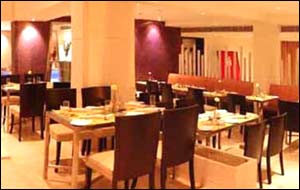 EDITOR RATING
8.5
Food
Service/Courteousness
Ambience
Value For Money
8.0
8.5
8.5
9.0
Suggestions
Good for date/family
NA
Easy parking
NA
Long waiting
NA
The Scene
Needless to say, The Golkonda's sleek and almost avant garde avatar since 2007 has rubbed off on the restaurants, too, and Melange - the ertswhile Skylight - is no exception. The lounge coffee shop looks glossy with the face-lift - a huge overhead screen to watch TV on is just one of the bells and whistles. Fortunately, it continues to be value-for-money for what it offers.

Though located at the far end of a rather modest lobby for a star hotel, Melange is spacious, with about 15 tables, and a separate smoking zone. The furniture is elegant if not fancy, and while the place itself looks not much different from a normal star-hotel lobby coffee shop, the slicker interiors of the hotel and the tall vertical chute right up to the skylight at the rooftop lend it some character and some sophistication.

The Food
Melange offers "global cuisine" - the 100 or so items on the menu are, indeed, a Melange from across the globe. There's Chinese, Indian, Southie, Thai, Conti and even Afghani on the a la carte menu - a dish or two from everywhere. So you have Fried Prawn & Calameri, Afghani Lamb Kebab, Satay, Torpendo Peppers, Caeser's Salad, Tom Yum Soup, burgers and sandwiches, quesadillas, Allam Kodi, Pork Chops Peri Peri, Kadai Paneer, Mushroom Rissole and Chicken Stroganoff and Tenderloin Steak among others, all on the same page.

There's a smaller, separate menu for non-peak hours, which has mostly a dozen items like puri, parathas, waffles and pancakes, and the elaborate menu is available during lunch and dinner times. Melange is however more popular for the buffets, especially the popular Golkonda midnight biryani buffet from 11pm-2am.

Soups, starters and bread rolls apart, the midnight buffet has 3 veg and 3 non-veg main course dishes apart from the biryani (veg and non-veg), and the standard plain rice, sambar and curd. Plus, of course, a smattering of desserts.

The food is star-hotel fare - they delight in keeping it friendly to delicate stomach-linings. The good part, however, is that the prices are fairly wallet-friendly for the ambience and service - a chola bathura or plate of puri costs Rs. 75.

ADVERTISEMENT
This page was tagged for
hotel golkonda midnight buffet cost
lunch buffet in hyderabad at Rs300
perhead rs. 300 for buffet lunch in hyderabad
non veg buffet cost at golkonda hotel masab tank hyderabad
CHOLA BATHURA PRICE DELHI
Follow @fullhyderabad
Follow fullhyd.com on
About Hyderabad
The Hyderabad Community
Improve fullhyd.com
More
Our Other Local Guides
Our other sites
© Copyright 1999-2009 LRR Technologies (Hyderabad), Pvt Ltd. All rights reserved. fullhyd, fullhyderabad, Welcome To The Neighbourhood are trademarks of LRR Technologies (Hyderabad) Pvt Ltd. The textual, graphic, audio and audiovisual material in this site is protected by copyright law. You may not copy, distribute, or use this material except as necessary for your personal, non-commercial use. Any trademarks are the properties of their respective owners. More on Hyderabad, India. Jobs in Hyderabad.