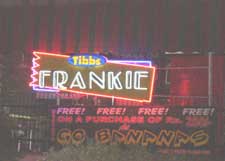 Deepa Menon / fullhyd.com
EDITOR RATING
9.0
Food
Service/Courteousness
Ambience
Value For Money
NA
NA
NA
NA
Suggestions
Good for date/family
NA
Easy parking
NA
Long waiting
NA
And how the trend has caught on. When Mumbai's fave frankie place tentatively opened its first outlet next to the Lifestyle complex, they weren't sure how it'd go. Would people pay 25 bucks for what is essentially a chapaati roll? Now, around ten new branches later, it's safe to say the formula works. Hyderabad is descending in droves. As proof of its prosperity, the Begumpet joint, still the most popular one, now has a big flashing neon sign. Yes, we'd say it's been a success.

And it is basically a roti stuffed with a filling of your choice. With a mystery sauce, and onions, and vinegar, and chillies, and lots of cheese. The choice isn't too wide, and the the most popular is the Veg Cheese Frankie, which has all of the above and a vegetable cutlet that's mostly potato. The Tawa Chicken is spicier, heavier and also as much in demand. The Masala Veg is nothing great, but the Paneer Frankie is pretty good. The Mutton Frankie is also avoidable, but the Plain Cheese is yum.

ADVERTISEMENT
This page was tagged for
best franky stores in hyderabad
tibbs frankie hyderabad onear name
the frankey house Hyderabad
frankie in secunderabad
Tibbs.Frankie.sales.job.in.hydreabad.com
Follow @fullhyderabad
Follow fullhyd.com on
About Hyderabad
The Hyderabad Community
Improve fullhyd.com
More
Our Other Local Guides
Our other sites
© Copyright 1999-2009 LRR Technologies (Hyderabad), Pvt Ltd. All rights reserved. fullhyd, fullhyderabad, Welcome To The Neighbourhood are trademarks of LRR Technologies (Hyderabad) Pvt Ltd. The textual, graphic, audio and audiovisual material in this site is protected by copyright law. You may not copy, distribute, or use this material except as necessary for your personal, non-commercial use. Any trademarks are the properties of their respective owners. More on Hyderabad, India. Jobs in Hyderabad.