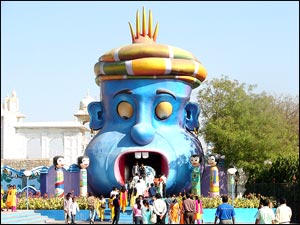 Ayanti Guha / fullhyd.com
You can't have come to Hyderabad and not heard of RFC as a must-visit. If that feels like a difficult sentence to read, well, you should see the prices at RFC. A trip for a family of 4 to this place can set you back by a grand (assuming you are planning to skip food). And a day of your life.

When Ramoji Film City was built in 1991, it injected a huge bolus in the much-lacking fun factor of Hyderabad's touristy image. People knew Hyderabad's rich history, they knew the Charminar, they knew where to buy pearls, and they knew all the spots for downing biryani and haleem, but they didn't always know where they could have F-U-N.

It was left to a certain Ramoji Rao to take care of that.

First, some gossip. Ramoji Rao started off as a copywriter or an even lesser mortal, built the biggest media empire in India over next 30 years (Eenadu, some zillions of ETV channels, Usha Kiron Movies, a movie magazine and some others, an outdoor advertising company and an ad agency, and some non-media entities like a chit fund company, a pickle company (but why?), a couple of clothing stores, and a hotel or two in Visakhapatnam), and one day decided to do a Howard Hughes, by putting all that he earned, and plenty of other people's money, into one solo dream project that had no precedent in India. Yes, certainly not what McKinsey & Co would have recommended.

Some Rs. 1,000 crores went into RFC. At least that's what our little birds tell us. And it sure looks it.

Ramoji Film City has a lot of hoopla surrounding it. That's the least you can do for your billion dollar baby as a resident media baron having your own mint. So RFC has been called a magical place, the best theme park in India, the seventh wonder of Hyderabad and many other superlatives. And the credibility is not purely home-grown either - the Guinness Book of World Records calls it the largest film city in the world. Yes, that means the unthinkable - it beats the biggest names of Hollywood like Universal, MGM and Disney.

RFC started out solely as a film city in 1991, leased out to film-makers. In that role, this one had been planned in a way that it was almost entirely self-sufficient. Right from the heroine's false eyelashes to the fuel for the helicopter in the grande finale and the very chopper itself, RFC provides everything. As an employee proudly proclaimed, "From water to electricity, we have our own. Outsourcing is NOT a word in our vocabulary."

But RFC's operational costs grew to leviathan proportions, and - as the gossip mills have it - were getting the group into some serious financial trouble. Then one day it dawned on Mr. Rao that the sets that they were using for the movies could be utilised for tourism purposes as well. And lo and behold, a true Aha! experience occurred, as India's largest fun factory came to life, circa 1996.

And, to borrow a line from the Chiclets ad, it works.

RFC quickly metamorphosed into one of India's major tourist attractions by virtue of being one among none others. Nowhere was an area this large to be found, nowhere else were there these many exhibits, and nowhere was this much attention paid to detail.

But this kind of dedication, while admirable, isn?t exactly what you call fun, is it?

So this then is what Film City calls f-u-n... making and starring in your own movie, being in a Wild West show with whooping cowboys and shootouts, getting trapped in the belly of a serpent, getting hypnotized in a wizard?s lair, giant genies, a train made out into a eating joint, a pond that changes shapes as per the mood of the film director, a giant croc that lurks around for you as you get off a (yes) ocean liner, trampolines, rides, fantasy worlds, magic shows, food courts, and everything else which differentiates a glorious time from a mere holiday.

But isn?t all this mainly for the kids? With all the rides, the games and magic shows?

Simply put, no. While the kind of fun and games featured in the Film City largely capture the younger generation?s attention, the place works its charm on the older ones as well. You just have to see the gleeful shouts of parents shepherding their kids through mazes, scary houses, theme shows and what nots, and you understand why - because it?s fun when you let go. And that is what defines Film City.

For example, in "Fundustan", a little "kingdom" in RFC, they think of their visitors as kings, and your every fun-filled wish is catered to. You will find the tiniest of tots with their parents and grandparents, and each one busy with an activity of his/her own, in a world of his/her own. The bottom line at Fundustan is - children upto a 100 years are allowed. There are magic shows for the kids, an animal garden, a maze, a scary house and more that we cannot remember. And then, you would be missing out on discovering the magic of the place for yourself.

Like we said, a visit to the place will set you back by quite a bit, especially if you are part of a big group. But since repeat performances are not going to be that frequent, that one-time expense doesn?t end up pinching all that much.

And what do you get at the end of it all? Happy and tired kids who have shouted themselves hoarse, and even happier parents who have watched their children have a great time and recaptured a bit of the "what it feels like to be a kid again" feeling.

And when you are weary and feeling the twinges of hunger, just queue up to any of the multi-specialty eateries, or head straight for any of the two star hotels that the Film City has on its premises. They do indulge you pretty well, although the gilded interiors may make you wince. But bottom line is this - no cost or effort has been spared to ensure that you and your family have one of the best times ever.

The Ramoji Film City caters to about 10,000 visitors on usual days, and has a fleet of buses around the city at all major junctions to take you to the venue. Once inside, you can ride in a bright, red vintage bus as the tour guide takes you around Film City and shows you the sights that put it on the map.

RFC gets a two thumbs-up for exemplifying the fun factor potential of the twin cities. It?s where the fun begins, and for most who?ve visited it, it?s also where the fun ends.
Share. Save. Connect.
Tweet
RAMOJI FILM CITY SNAPSHOT
EVENTS AT RAMOJI FILM CITY
There are no events at Ramoji Film City scheduled currently.
RAMOJI FILM CITY USER REVIEWS
1 - 3 OF 3 COMMENTS
POSITIVE  |  NEGATIVE |  NEWEST  |  OLDEST  |  MOST HELPFUL  |  LEAST HELPFUL
USER RATING
7.6
11 USERS
Quality
Service/Courteousness
Value For Money
6.5
5.5
5.5
Nellam Sandeep Kumar(Sau) on 12th Jul 2012, 7:51pm | Permalink
Have u ever travelled from all this places to Ramoji.. Teri M____ Ki secunderabad se 7.6 Kms saale Begumpet nahi aaat 7.6 Kms ku Terku Ramoji aaya.. C__ye
pesarattu upma on 13th Dec 2011, 9:08pm | Permalink
not worth going all the way over there and wasting a whole day. if they let us walk the sets it would have been ok. there is some fun for children but you can go to a exibition in hyd itself


Pros: children would have fun
Cons: too far