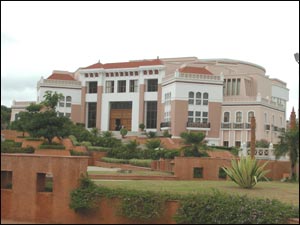 Aishwarya Subramanyam / fullhyd.com
Easily the best auditorium in the city, the Shilpa Kala Vedika is quite a pleasure to visit. Apart from several music and dance performances, some of the biggest plays in town have been staged here; the auditorium is perfect both for large productions with lavish sets, as well as for smaller ones with few props.

We loved Tumhari Amrita, with Shabana Azmi and Farooque Shaikh sitting in pools of light and reading out letters - it's a credit to the sound system that we resonated to the lilt of emotion in every word. The brilliant Tughlaq was staged here too, and left its audiences spellbound with its gorgeous costumes and excellent acting.

Shilpa Kala Vedika's large seating capacity works both for and against it, as organisers of public performances are never sure that enough people will turn up, and so have to price tickets high, which puts it out of the common man's reach, which results in not many people turning up, and so on. Vicious circle. Also it's very far from the center of the city. The auditorium is used extensively for business and technology conferences, however, as it comfortably holds quite a crowd.

ADVERTISEMENT
This page was tagged for
Kallavedikal
shilpa kala vedika place name
gana sudha new relise
shilpa kala vedika 2017
sanskruthika kalavedika vedios.com
Follow @fullhyderabad
Follow fullhyd.com on
About Hyderabad
The Hyderabad Community
Improve fullhyd.com
More
Our Other Local Guides
Our other sites
© Copyright 1999-2009 LRR Technologies (Hyderabad), Pvt Ltd. All rights reserved. fullhyd, fullhyderabad, Welcome To The Neighbourhood are trademarks of LRR Technologies (Hyderabad) Pvt Ltd. The textual, graphic, audio and audiovisual material in this site is protected by copyright law. You may not copy, distribute, or use this material except as necessary for your personal, non-commercial use. Any trademarks are the properties of their respective owners. More on Hyderabad, India. Jobs in Hyderabad.