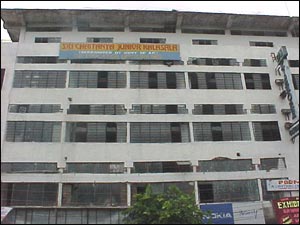 Ramakant D S / fullhyd.com
Sri Chaitanya's academic achievements are like the stock market indices. We encounter them almost every day, but only a few of us notice them. But once in a while comes the crash that grabs all the attention. Cases of students committing suicide from these authoritarian residential colleges have appeared more than once. In 2001, there were three reports of suicide in as many months from the Vijayawada branch.

To be fair, Sri Chaitanya's name is not the only one to appear in these unfortunate lists - Intermediate education is a huge business, and several other well-known junior colleges are known to function as concentration camps for two years with little respect for human rights. But Sri Chaitanya's name appeared in the lists multiple times. It was also (in)famous for not allowing parents to meet their kids when they wanted (the students stay at hostels) saying that would disturb the children, for some ill-behaved boorish wardens, for conducting classes during vacations etc.

The good news is that Sri Chaitanya was no dead ringer for all the criticism, and the draconian coaching methods seem a thing of the past now. By 2005, Sri Chaitanya had 17 branches with 12,000 students in the city, making it the biggest junior college. That cannot be for nothing - they do deliver. For years now, they have dominated the Intermediate and EAMCET top rankers' lists (especially in medicine, with Narayana leading in engineering as we write this), and are slowly making a mark in the IIT-JEE rank-lists too.

The methodology is of course rigorous and exacting. Extra hours of study, classes during holidays and vacations, and continuous tests are all de rigeur. The lecturers are dedicated and motivated, and, most importantly, well-paid. All of this translates into the full page ads with a zillion photographs. To most parents, it seems worth it. And as for the kids, they're just kids.
Share. Save. Connect.
Tweet
SRI CHAITANYA JUNIOR COLLEGE SNAPSHOT
EVENTS AT SRI CHAITANYA JUNIOR COLLEGE
There are no events at Sri Chaitanya Junior College scheduled currently.
SRI CHAITANYA JUNIOR COLLEGE USER REVIEWS
1 - 14 OF 14 COMMENTS
POSITIVE  |  NEGATIVE |  NEWEST  |  OLDEST  |  MOST HELPFUL  |  LEAST HELPFUL
USER RATING
5.5
2 USERS
Quality
Ambience
Service/Courteousness
Value For Money
1.0
7.0
3.0
1.0
sai charan on 6th Jul 2016, 7:59pm | Permalink
better to update more pictures of chaitanyapuri campus
Mallikarjuna on 25th Jun 2015, 10:29am | Permalink
To:
The Chairmen
Sri Chaitanya Bharati Junior College (TBC),
Vasundhara Nagar,
Tiruchanur,
Tirupati
Pin code - 517501
From:
K. Mallikarjun
Bangalore

I am here to informing about the Principle named as S. K. Bhasha of this branch that last yesterday He has beaten terribly my Child K. Himavardhan without having correct information and now my child became hospitalized. I have enquired with other faculty and students and come to know there no mistake of my child and without clarifying he has taken action on Student. I have been visiting and spoken to Principle last one year, but He is really thoughtless and he uses all abuse words in front of us and behaves really bad. He does not have any knowledge of Collage rules and information of fees. He tells which not at all matching for other faculty information. All students are suffering by his actions.

Here, my humble request is please U should take correct action on him and please remove him as principle. We have plane to give a police complete but, students should not to be involve so, I felt not to do so. If no reaction then I have plane to inform UGC and other actions like strike in front of Ur Collage. Please don’t make me to do all these things by taking correct action from U all.
Hopefully expecting Ur needful to the students and parents
Thanking You

Faithfully
K. Mallikarjuna
d.sushma on 15th Jun 2015, 3:19pm | Permalink
does this branch offer long term?
m.adisesha reddy on 27th Oct 2014, 7:14am | Permalink
which is the best girls junior college in Hyderabad.
shre sparkbhaw on 11th Apr 2014, 10:20pm | Permalink
hii i am a student of sri chaitanya i personally feel that this is the worst college i have ever heard of this college faculty. students.incharges. principals. ...all are devils they dont have feeling the beat you if you commit a small mistake like a beast.

they emphasise to byheart rather than understanding concept upto 10 i was a cbse student i joined intermediate in 2013 june ....seriously this colleges administration and aminities ...overall this is gona waste hump ...DONT DARE TO JOIN THIS INSTITUTION ..
ofcource ranks come ...but how many? ......out of 1000/1200 students in a college only 3/5 will get .....not because of college but thse are brilliant mimds so they get.
HOME AND SELF PREPARATION WITH PROPER GUIDENCE AND PRACTICE CAN ACCHIVE EVERY GOALS IN LIFE....
moreover this collges want to make money

i request never join this institute.

..
Srinivas on 4th Oct 2013, 11:41am | Permalink
As per my observation, Physics faculty is worst . No subject knowledge . I think Narayana and Gayatri were best colleges.
Sri on 4th Aug 2013, 12:21pm | Permalink
Sri Chaitanya is one of the top from the bottom. I have visited many branches for survey there is no responsible person in any of the branches. Could any one provide me the director B.S. Rao email id? I don't find his details in anywhere what kind of educational institute it is... We should feel ashamed of ourselves for encouraging such colleges.
anju on 3rd May 2013, 1:33pm | Permalink
w st
miss.x on 22nd Apr 2013, 4:17pm | Permalink
this is one of the shameless college.this college doesn't provide best materials like narayana and gayatri.they just need full pockets of money.Its world's waste college.
praven on 9th Apr 2013, 9:29pm | Permalink
http://www.sakshieducation.com/(S(u3h2vhmff4sqnpzgohwofk45))/inter(new)/InterStory.aspx?nid=16295
x on 9th Feb 2013, 2:23am | Permalink
This is the most worst college with all sorts of ill affairs
babu on 25th Dec 2011, 10:30pm | Permalink
good college for parents who want their kids to get just "marks" and nothing else. Not well liked by the students. College is mostly very strict. Overall good for parents... bad for students.

ADVERTISEMENT
This page was tagged for
sri chaitanya pananiya campus dilshuknagar
real devels in secbad plz
sri chaitanya pu college hyderabad
distance from malakpet metro staion to sai chaitanya junior college dilsuknagar
sai chaitanya junior college dilsuknagar
Follow @fullhyderabad
Follow fullhyd.com on
About Hyderabad
The Hyderabad Community
Improve fullhyd.com
More
Our Other Local Guides
Our other sites
© Copyright 1999-2009 LRR Technologies (Hyderabad), Pvt Ltd. All rights reserved. fullhyd, fullhyderabad, Welcome To The Neighbourhood are trademarks of LRR Technologies (Hyderabad) Pvt Ltd. The textual, graphic, audio and audiovisual material in this site is protected by copyright law. You may not copy, distribute, or use this material except as necessary for your personal, non-commercial use. Any trademarks are the properties of their respective owners. More on Hyderabad, India. Jobs in Hyderabad.