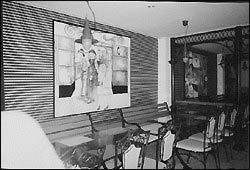 Close, but no cigar.

This used to be the Dakhni, dedicated to Andhra and other South-Indian cuisine. That's been replaced in one of the frequent changes that have swept through this hotel from time to time.

The Scene
It's gone in for a wrought-iron and stone look. A fair mix of tables, most of which are 4-seaters by default, adds up to seating space for about 50. In a slightly optimistic moment, the designers provided for waiting-room too. Quite definitely it's overshadowed by its more popular cousins the Underdeck probably sees more custom in a night than Strings does in a week.

The paintings on the wall, with a zebra-stripes backdrop, are strangely reminiscent of Ralph Steadman. Perhaps it's the not-quite-right air-conditioning or the too-loud music, but despite the extremely comfortable chairs and the outstandingly warm service, you get the feeling that this is one sandwich short of a picnic.

The Food
The menu, which you can browse through outside the main door, is in three parts. First there's the liquor list which has the usual collection of wines and other spirits and cocktails. You can also choose from a range of cigars and yes, there's a separate non-smoking section.

The food menu itself is in two parts. First there's the clearly continental segment, then there's the South-East Asian section. Given the variety of foods that these two regions of the globe are home to, you'd expect the menu to be the size of the Encyclopaedia Brittanica. In actual fact, the bill of fare is a prcis of sorts. The Asian side is largely Thai-dominated, while the European can't be slotted too easily.

Dinner gives you the option of a "buffet-served-on-your-table", as the steward disarmingly puts it. This is a 4-course, set menu that's served where you sit and that'll run you about Rs. 350 per head. You can, of course, choose between a Continental and a Thai version, with a vegetarian and a non-vegetarian option in each.

At lunch time, it's strictly a la carte. There's the usual set of soups. The intriguingly named salad, "It's Greek To Me", is a good and neutral start. While the Boozy Beef Steak (port-marinated in death, even if abstemious in life) and the Grilled Vegetarian Steak are good, the Thai side of the menu is distinctly better.

Red dots obligingly indicate the level of spice you can expect in each dish. The Thai curries are excellent you can't go wrong with any of them. Most of the names are a confusing array of vowels with the odd consonant inserted strategically, but the dishes are uniformly good.

The Tiramisu, fruit scented, makes an excellent dessert. As does the remarkable Spiced Chocolate Casserole, if you've room for it.

The Verdict
A good restaurant, good food, and a good choice for residents. But not outstanding on any score. Non-residents can, and probably do, choose from a wider field of worthy competition.

ADVERTISEMENT
This page was tagged for
alimunium stripes in hyderabad+cost
+961 ,list only companies email address
the strings hyderabad
champagne bottle sellers in banjarab hills hyderabad
strings hyderabad
Follow @fullhyderabad
Follow fullhyd.com on
About Hyderabad
The Hyderabad Community
Improve fullhyd.com
More
Our Other Local Guides
Our other sites
© Copyright 1999-2009 LRR Technologies (Hyderabad), Pvt Ltd. All rights reserved. fullhyd, fullhyderabad, Welcome To The Neighbourhood are trademarks of LRR Technologies (Hyderabad) Pvt Ltd. The textual, graphic, audio and audiovisual material in this site is protected by copyright law. You may not copy, distribute, or use this material except as necessary for your personal, non-commercial use. Any trademarks are the properties of their respective owners. More on Hyderabad, India. Jobs in Hyderabad.