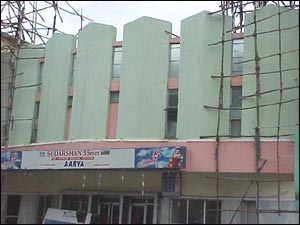 Mithun Verma / fullhyd.com
EDITOR RATING
4.0
Comfort
Ambience
Cleanliness
Audio/Visual Quality
3.0
3.0
3.0
4.5
Suggestions
Good for date/family
NA
Easy parking
NA
Decent legroom
NA
Sandwiched between the two sumo weights of Telugu cinema halls, Sudarshan 35mm was almost invisible when it started out. But just like the sutra that keeps 80% of men alive, it's not the size that matters, it's how you use it. In a matter of just months, the hall won a repute of being better than the bigger ones. Till today, that reputation remains doubtfully intact.

One thing is for sure - Sudarshan 35mm has arguably the best DTS in town. Watching a thriller there can scare you to eternity. A great chance to let your sugar-pie bury her face in your shoulder.

Another notable deviation of the place from the theaters at the crossroads, is the lack of a balcony. Actually the demarcation of the seats is done by barricades (sort of) rather than any other construction. This allows a 50 rupees guy to learn hooting from the 10 rupees guys by mere observation.

The hall has one of the best snack-bars of the cross-roads. The popcorn stand cannot be missed at any cost. The flavored popcorn in itself is a trip worth to the hall. The only other place where you get such sinfully tempting flavoured popcorn is at Venkataramana.

The Equipment Used in Sandhya Devi Sudershan Are the Best in The Country.

Bramaramba Sound is Noisy Thats not Sound its Head Ache.Sound is Something that sound wow you by SmoothNess and Clarity and liveliness in Sound.
ASLAM SIDDIQUI on 23rd Apr 2015, 3:12pm | Permalink
Wow what a fantastic 4K projection at sudarshan 35mm And now the projection is as good as DEVI 70MM.Watched s/o satyamurthy.fantastic colour and contrast ratio and most importantly brightness and it was like watching a blu ray on a 70mm screen.Sound has been upgraded to DOLBY ATMOS but i think we will be able to enjoy full effects with the release of BAHUBALI. 10/10 FOR SUDARSHAN 35MM THE PRIDE OF HYDERABAD.
vazrox on 26th Mar 2015, 5:24pm | Permalink
*****Update***
Jus watched evade subhramanyam @ sudarshan 35mm today....I felt there is improvement in the projection the visuals were bright ....and there has been upgradation in the sound system....now installed with DOLBY ATMOS technology.... I think its the only single screen to have this technology (you can observe the overhead speakers)
RATING
8
ASLAM SIDDIQUI on 27th Feb 2015, 6:56pm | Permalink
Vazrox your views on 4K PROJECTION at sudharshan 35mm are too good.I too felt the same i.e the visuals are not as good as devi.Just above average visuals while watching malli malli idi rani roju today.
vazrox on 25th Feb 2015, 10:08am | Permalink
one thing to be noted .....management is advertising as 4K projection but the visuals are not as bright as DEVI's(4K) .....only DEVI theater's projection can be believed as 4K PROJECTION
vazrox on 4th Mar 2014, 10:09am | Permalink
DOLBY SURROUND 7.1....now its undoubtedly best in town
SB on 25th Dec 2013, 4:02pm | Permalink
I watched Venkatdri Express here.There were to types in balcony (lower/upper) with the same cost(Rs.70) but the seats in the lower balcony are like of Rs.30.
When we asked they told us the upper balcony is only for e-booking.And,these lower balcony seats are too near to the big screen.The experience was very bad.How can they sell such seats for Rs.70?
Obviously,this is projecting a very bad image about this theatre which has some reputation.
And,I sincerely hope that the management will take a serious note of this matter.
Don't we people deserve our money's worth?
DR.ASLAM SIDDIQUI on 25th Feb 2014, 6:44pm | Permalink
watched neenokadaina recently and i was quite disappointed by the projection system which was not bright enough even though the manager told me that the projector is 4k.sound was ok.sir sudarshan and devi are our land mark theatres we expect fantastic image and sound quality..
vineeth mullapudi on 4th Jun 2013, 4:51pm | Permalink
No.1 theatre in r.t.c x road screen clarity, sound system nd seatings r awsum nd nice experience of watching mahesh babu's mves here wonderful cinematic climate B-)
prasad on 18th Nov 2012, 4:45pm | Permalink
I watched tupaki here on the 2nd day..nd there were to types in balcony with the same cost..but the seats in the so called LOWER BALCONY wer like of Rs.30/-
Are they cheating us ??
and how can we get a ticket fr Upper balcony ??

Screen is as bigger as 70mm theater
Sound is best in X Roads ..even in city..you can say!


Pros: Location, Sound and Projection
Cons: Nothing
Rajesh on 5th Jun 2008, 8:39pm | Permalink
The best theatre (Individual) I have ever seen or known to exist. From the outside, it might now seem so but from the inside, u hav to experience it to believe it.

ADVERTISEMENT
This page was tagged for
Sudarshan 35MM contact number
Sudarsan theatar rtc x rodes hyd contact no
Sudarasan 35 mm theatar hyd contact no
Sudarshan 35mm rtc cross hyd contact no
Sudarshan 35 rtc x roads h y d contact no
Follow @fullhyderabad
Follow fullhyd.com on
About Hyderabad
The Hyderabad Community
Improve fullhyd.com
More
Our Other Local Guides
Our other sites
© Copyright 1999-2009 LRR Technologies (Hyderabad), Pvt Ltd. All rights reserved. fullhyd, fullhyderabad, Welcome To The Neighbourhood are trademarks of LRR Technologies (Hyderabad) Pvt Ltd. The textual, graphic, audio and audiovisual material in this site is protected by copyright law. You may not copy, distribute, or use this material except as necessary for your personal, non-commercial use. Any trademarks are the properties of their respective owners. More on Hyderabad, India. Jobs in Hyderabad.