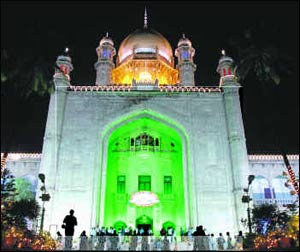 Deepa Menon / fullhyd.com
Vincent was a serious young man. Except when someone mentioned onions. Then his face would light up like a Christmas tree and he would jump up and down in excitement. This got to be very awkward once he turned 21, but young Vincent Esch wasn't the slightest bit perturbed by strange looks. He had cities to plan and monuments to immortalize. Onions, though, remained a special passion. More on that later.

Vincent was one of the few British architects hired to work on pre-Independent India's emerging urban landscape. After he got Kolkata's Victoria Memorial Hall on his resume (as a Construction Supervisor), he was snapped up by the seventh Nizam to help reconstruct Hyderabad. And that was when the High Court came into existence on the banks of the now sludge-like river Musi. Along with it there appeared at random intervals in the city, the Railway Station, the City High School and Osmania Hospital. All in the signature style of Vinny Esch.

But the High Court remains a class apart. And not just because it cost a bomb (two million rupees in those days was an astronomical sum, and still is for some of us - pink granite, after all, is not cheap, and neither are carved red sand stone pillars). The High Court, unlike the rotund little forts and palaces that surrounded it, was built in the Perpendicular Moghul-Saracenic style, which translated into elegant onion-shaped domes that stretched languorously to the sky.

ADVERTISEMENT
This page was tagged for
afzalgung aunty contact number
hyd high court interior pics
food court in afzalgunf
tourist attractions in hyderabad pakistan
hyderabad high court address with map
Follow @fullhyderabad
Follow fullhyd.com on
About Hyderabad
The Hyderabad Community
Improve fullhyd.com
More
Our Other Local Guides
Our other sites
© Copyright 1999-2009 LRR Technologies (Hyderabad), Pvt Ltd. All rights reserved. fullhyd, fullhyderabad, Welcome To The Neighbourhood are trademarks of LRR Technologies (Hyderabad) Pvt Ltd. The textual, graphic, audio and audiovisual material in this site is protected by copyright law. You may not copy, distribute, or use this material except as necessary for your personal, non-commercial use. Any trademarks are the properties of their respective owners. More on Hyderabad, India. Jobs in Hyderabad.