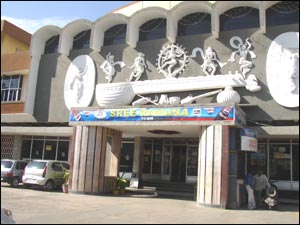 But invariably, the theater runs housefull. This is due to the theater's policy of running only the latest movies for just a week. And more importantly, its location is prime. Everybody in the neighborhood (Shivam, Ramanthapur, Nallakunta, Amberpet etc.) loves going to this place. Mainly because they can't go anywhere else. Also, the government stats show a high percentage of masochistic behavior patterns in these places.

The screen is a bit of a better deal. It does show what the projector's trying to do. There aren't many cars that come along, so the parking for the 4-wheelers is sufficient. There might be a few complaints regarding the cleanliness of the place, too. And one too many tickets for sale outside the counter.

Overall, Sreeramana is not a cinema-hall haven, but it's definitely better than other theaters of its genre like Light House, that stopped existing decades ago. So go to Sreeramana to get a gist of what lies ahead after you are six feet under.
Share. Save. Connect.
Tweet
SREE RAMANA 70MM (AMBERPET) SNAPSHOT
MOVIES AT SREE RAMANA 70MM (AMBERPET)
There is 1 movie at Sree Ramana 70mm (Amberpet) being screened currently.
SREE RAMANA 70MM (AMBERPET) USER REVIEWS
1 - 5 OF 5 COMMENTS
POSITIVE  |  NEGATIVE |  NEWEST  |  OLDEST  |  MOST HELPFUL  |  LEAST HELPFUL
USER RATING
9.4
5 USERS
Comfort
Ambience
Cleanliness
Audio/Visual Quality
8.5
8.5
8.0
9.5
Good for date/family - NA
Easy parking - NA
Decent legroom - NA
shiva shankar s on 27th Sep 2014, 7:26pm | Permalink
it is a fabolous theatre in heart of city
kalanidhi on 15th Jul 2014, 10:43pm | Permalink
Meanwhile. maha impressed that all the info abt show timings, location of theatres are all right there.. so its easy to decide on where to go and when to go..
Kalanidhi on 15th Jul 2014, 10:36pm | Permalink
Every single details needs to be updated... The review is at least five or seven years old... Sriramana is among the best in the area..
irshad123 on 10th Oct 2009, 5:32pm | Permalink
h

ADVERTISEMENT
This page was tagged for
what movie is there in sree ramana 70mm
sreeramanatheatre
ramana theaters amberpet
sreeramana theater in tic tic tic
35MM Screen - Sree Ramana Theater
Follow @fullhyderabad
Follow fullhyd.com on
About Hyderabad
The Hyderabad Community
Improve fullhyd.com
More
Our Other Local Guides
Our other sites
© Copyright 1999-2009 LRR Technologies (Hyderabad), Pvt Ltd. All rights reserved. fullhyd, fullhyderabad, Welcome To The Neighbourhood are trademarks of LRR Technologies (Hyderabad) Pvt Ltd. The textual, graphic, audio and audiovisual material in this site is protected by copyright law. You may not copy, distribute, or use this material except as necessary for your personal, non-commercial use. Any trademarks are the properties of their respective owners. More on Hyderabad, India. Jobs in Hyderabad.