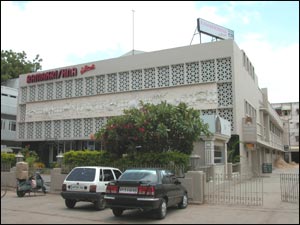 Renovated after a "politically-motivated" fire, the theater now has an impressive courtyard. Complete with a fountain, benches, bushes and turf, the "garden" (as the management calls it) is a textbook example of Hype Through Landscaping.

Impressively titillating sculpture holds your attention as you walk through the lobby. The snack-stand is a tad expensive, but nothing you won't expect in a theater that's decked up this way. And the parking space and booking counters are bigger than the ones at the 70mm hall.

The booming sound will certainly make you want to jump up and dance if only nobody else were around. And you can, for there is a LOT of place available for that. Although the tickets are fairly priced, the chances of you getting your hands on them across the counter are less than those of getting them outside the counter, where they are sold at exorbitant prices, sometimes even by burqa-clad women. Where did the burqa-clad women come from? Ramakrishna has always been a women-friendly theater, and the fairer sex gets tickets easier and more in number per head. Some of them take the easy way out by reselling them at a, er..., premium.

You can get something to munch at the adjoining Kamat, and chase it down at the excellent fruit juice shops beside it. Glittarati offers you a whole lot more than just a movie.

ADVERTISEMENT
This page was tagged for
Mukta A2 Cinemas - Abids
nuktha a2 abids does have 70mm screen
ramakrishna theatre
ramakrishna theatre movie
ramakrishna theater in hyderabad
Follow @fullhyderabad
Follow fullhyd.com on
About Hyderabad
The Hyderabad Community
Improve fullhyd.com
More
Our Other Local Guides
Our other sites
© Copyright 1999-2009 LRR Technologies (Hyderabad), Pvt Ltd. All rights reserved. fullhyd, fullhyderabad, Welcome To The Neighbourhood are trademarks of LRR Technologies (Hyderabad) Pvt Ltd. The textual, graphic, audio and audiovisual material in this site is protected by copyright law. You may not copy, distribute, or use this material except as necessary for your personal, non-commercial use. Any trademarks are the properties of their respective owners. More on Hyderabad, India. Jobs in Hyderabad.