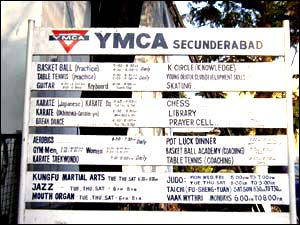 Prasheel Anand / fullhyd.com
Started in 1969 when the Telangana movement was at its zenith and schools and colleges remained closed for an year, the flamboyant YOCS - the Young Orators' Club (the 'S' perhaps stands for Secunderabad) - at YMCA Secunderabad is one of the most popular oratory clubs in town, resonating with the vivacity of the more voluble youngsters of town.

Conducting public speaking events such as elocutions, debates, JAMs (Just A Minute) and group discussions for members and newcomers, this flamboyant club boasts of ex-members who are into a multitude of professional fields - from politics to management to, of course, IT. While it aims to be a place where loquacious amateurs hone their skills, a lot of trepid rookies preparing for MBA GDs also diligently color up the ambience.

YOCS Sessions are held every Saturday at 6:30pm at the YMCA building. The club consists of a President, a Vice-President, a General Secretary and a Treasurer - these form the governing body. The members of the club are selected on regularity and proficiency basis. Oh yes, the place has been known for some pretty raunchy politics over the past decade.

The membership fee is Rs. 200 per annum. YOCS also holds re-unions for its ex-members each year, no matter where the alumni are.

ADVERTISEMENT
This page was tagged for
Oratory clubs in hyderabad
Ymca secunderabad
Yocs group hyderabad
ymca secunderabad
ymca hotel secunderabad
Follow @fullhyderabad
Follow fullhyd.com on
About Hyderabad
The Hyderabad Community
Improve fullhyd.com
More
Our Other Local Guides
Our other sites
© Copyright 1999-2009 LRR Technologies (Hyderabad), Pvt Ltd. All rights reserved. fullhyd, fullhyderabad, Welcome To The Neighbourhood are trademarks of LRR Technologies (Hyderabad) Pvt Ltd. The textual, graphic, audio and audiovisual material in this site is protected by copyright law. You may not copy, distribute, or use this material except as necessary for your personal, non-commercial use. Any trademarks are the properties of their respective owners. More on Hyderabad, India. Jobs in Hyderabad.