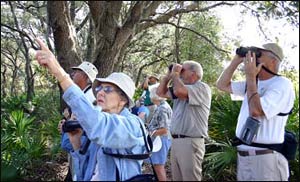 Prasheel Anand / fullhyd.com
No, it's not headquartered on Necklace Road. And how can we resist that dig?

The name Bird Watchers might mislead you into assuming that this is a flock of bird enthusiasts does nothing to kill time apart from bird-watching. Well, it's not very different, only that it's a much more serious business.

Started in 1980, Bird Watchers' prime goal was to record and study the appearance of migratory birds in and around Andhra Pradesh. Initially, the group comprised of only ornithologists or conservationists who corresponded through a newsletter. However, the terms for membership were eventually relaxed, and even enthusiasts can now be a part of this organization.

As the membership levels soared owing to the popularity of their monthly newsletter 'Pitta' - meaning bird in Telugu - the activities included monthly field trips to places flourishing with rare birds such as the pelicans and floricans.

ADVERTISEMENT
This page was tagged for
bird watchers society contact number
ap bired society
yellowpages.fullhyderabad.com/bird-...
AP Birds association
Birds society of hyderabad
Follow @fullhyderabad
Follow fullhyd.com on
About Hyderabad
The Hyderabad Community
Improve fullhyd.com
More
Our Other Local Guides
Our other sites
© Copyright 1999-2009 LRR Technologies (Hyderabad), Pvt Ltd. All rights reserved. fullhyd, fullhyderabad, Welcome To The Neighbourhood are trademarks of LRR Technologies (Hyderabad) Pvt Ltd. The textual, graphic, audio and audiovisual material in this site is protected by copyright law. You may not copy, distribute, or use this material except as necessary for your personal, non-commercial use. Any trademarks are the properties of their respective owners. More on Hyderabad, India. Jobs in Hyderabad.