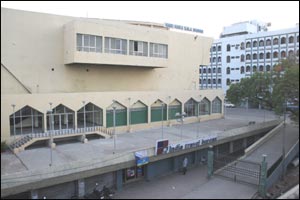 Aishwarya Subramanyam / fullhyd.com
A somewhat dark and dingy auditorium that's probably most visited for magic shows, Hari Hara Kala Bhavan is one of the best examples of lots of space gone pathetically to waste. Neglected and unkempt, the auditorium has come a long way - in the wrong direction - from its glory days. We don't remember when those were, but they must have existed, since the place does have a hint of romance and knowing experience about it.

The center holds a few events a month, a lot of them award ceremonies and such. It has, however, seen a lot of cinema come and go. There was a French film festival screened here once, and children's film festivals are held from time to time. The hall is also used by cultural and religious societies who hold their annual shows here, whether it's a play (the Young Christian Society) or a musical by a neighbourhood Malayali association.

And then, of course, there are the magic shows. These are ever-popular with the cityfolk, and totally liven up the place. Thanks to the magician's unending supply of energy and ribbons, his untiring vocal chords, and our willingness to ignore the card up his sleeve and believe for a moment in the magic of magic.

ADVERTISEMENT
This page was tagged for
?? ?? ??? ???? ????????? ??????
?? ?? ??? ???? ????????? ??????
where is hari hara kala bhavan
hari hara gardens in secunderabad address
Harihara dj contact no
Follow @fullhyderabad
Follow fullhyd.com on
About Hyderabad
The Hyderabad Community
Improve fullhyd.com
More
Our Other Local Guides
Our other sites
© Copyright 1999-2009 LRR Technologies (Hyderabad), Pvt Ltd. All rights reserved. fullhyd, fullhyderabad, Welcome To The Neighbourhood are trademarks of LRR Technologies (Hyderabad) Pvt Ltd. The textual, graphic, audio and audiovisual material in this site is protected by copyright law. You may not copy, distribute, or use this material except as necessary for your personal, non-commercial use. Any trademarks are the properties of their respective owners. More on Hyderabad, India. Jobs in Hyderabad.