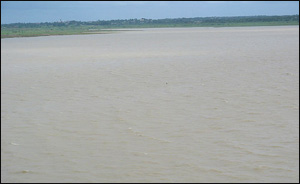 C Venkatesh / fullhyd.com
The toughest part of going to Gandipet the lake Osman Sagar is often referred to interchangeably by the name of the neighboring village is deciding which route to take. Both choices are equally enchanting.

Starting from Mehdipatnam, you can either take the tree-lined road through the Acharya N G Ranga Agricultural University that approaches the lake from its South-Eastern flank, or chase college-going-hot-rodders past the Golconda Golf Course and the Taramati Baradari to reach the North-Eastern shores. The various encouraging regimental mottos that decorate the roadsides in the cantonment areas from the gun-happy Churchill quotes put up by the Gunners to the refreshing "Bash On Regardless" notwithstanding, watch out for unmarked speed-bumps. Else, you'll be forcefully brought back to earth. Firmly and repeatedly.

Any which way you look at it, Gandipet is a must-visit spot. And rare indeed is the Hyderabadi who has never gone, or never dreamt of going, to Gandipet. This is easily the most popular picnic spot in the twin cities, though recent times have seen the Sanjeeviah Park and the Botanical Gardens sometimes stealing a march over it.

Most folks who visit Osman Sagar opt for the late evenings. There's nowhere else in Hyderabad that you can see the sun sink quietly into placid waters.

There's nowhere else in Hyderabad that you can take in rides at the Ocean Park or the Elles World Theme Park either.

For a spot that's so popular, this is amazingly and impressively pristine. Since this is one of the main sources of drinking water for the twin cities, the Government has worked overtime to keep the environs clear of pollution. And it shows. Except for the occasional intransigent villager who stubbornly paddles his canoe into the shallows to nab unsuspecting fish, this lake is remarkably unspoilt.

History relates that the reservoir formed by the dam over the river Musi is named after Mir Osman Ali Khan, the last Nizam of Hyderabad. The lake is a stunning example of both the foresight of the builder, and of the glory that was Nizami Hyderabad.

There's a Shirdi Sai Baba temple at the Northern end, next to which are the Sagar Mahal that belongs to the Tourism Department and is currently being renovated (as we write this in early 2006) and the popular teenage-hangout: the intriguingly named Treasure Island, home to weekend parties, rain-dances and the like.

Apart from these, there's pretty much nothing despoiling the primal appeal. If you're planning an all-day picnic, make sure you're very mobile and that you've packed a full basket. The nearest decent restaurants are a few kilometers towards the cities, though light munchies and drinks can be picked up at the village.

It's either dutch courage, or the relative unfamiliarity of the local landlubbers with water hazards, that often lead to foolishly brave attempts to swim in the lake. Since the lake is approachable from several sides, this has proved to be an ill-advised adventure for numerous valiants whose obituaries pop up in the daily papers from time to time. These waters run silent, but run deep.

ADVERTISEMENT
This page was tagged for
gandipet osman sagar nearest mmts station
osman sager
osmansagar new name
few lines on osman sagar
osman sagar lake map
Follow @fullhyderabad
Follow fullhyd.com on
About Hyderabad
The Hyderabad Community
Improve fullhyd.com
More
Our Other Local Guides
Our other sites
© Copyright 1999-2009 LRR Technologies (Hyderabad), Pvt Ltd. All rights reserved. fullhyd, fullhyderabad, Welcome To The Neighbourhood are trademarks of LRR Technologies (Hyderabad) Pvt Ltd. The textual, graphic, audio and audiovisual material in this site is protected by copyright law. You may not copy, distribute, or use this material except as necessary for your personal, non-commercial use. Any trademarks are the properties of their respective owners. More on Hyderabad, India. Jobs in Hyderabad.