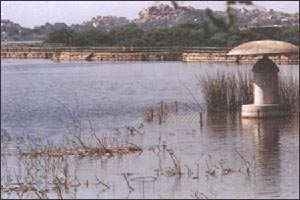 Aishwarya Subramanyam / fullhyd.com
Now a popular family picnic spot, the Mir Alam Tank was built in 1806 by Mir Alam, the then Prime Minister of Hyderabad. It is a mile-long bund formed by 21 arches, built by French engineers, it is claimed. We just go there to picnic and litter. The reservoir was once a major source of piped water supply to the city, but not any more. Now it is unfit for human consumption. But not for animal consumption, apparently.

The water in the tank is highly contaminated with industrial effluents and domestic sewage. The APSPCB (Andhra Pradesh State Pollution Control Board) report shows that the water has toxically high levels of coliform when it should have none at all. The water is acidic, has a dangerously high Ph level, and its hardness is very high as well. Why are we telling you this?

Because animals have died. In just one of several shameful incidents at the Nehru Zoological Park, a 14-year-old lion died because of dysentery and infection caused by the water, which it was bathed with and probably drank. The animals here are more sensitive than those in the wild, and already suffer from several skin diseases, diarrhoea, cholera and digestive system disorders. I think they'd rather not have a bath, on the whole.

ADVERTISEMENT
This page was tagged for
telangana hyderabad old mir alam tank map
mir alam tanl
rented houses in 9.No mir alam
Mir Alam tank selling property shop
setwin mir alam bahadurpura
Follow @fullhyderabad
Follow fullhyd.com on
About Hyderabad
The Hyderabad Community
Improve fullhyd.com
More
Our Other Local Guides
Our other sites
© Copyright 1999-2009 LRR Technologies (Hyderabad), Pvt Ltd. All rights reserved. fullhyd, fullhyderabad, Welcome To The Neighbourhood are trademarks of LRR Technologies (Hyderabad) Pvt Ltd. The textual, graphic, audio and audiovisual material in this site is protected by copyright law. You may not copy, distribute, or use this material except as necessary for your personal, non-commercial use. Any trademarks are the properties of their respective owners. More on Hyderabad, India. Jobs in Hyderabad.