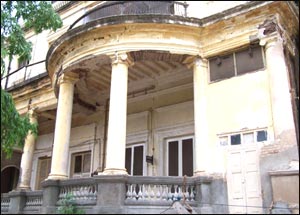 Deepa Menon / fullhyd.com
Joy can bring people together, but it's grief that binds them. For around ten days in March, Shia Muslims from all over the city seek each other out in houses of mourning - ashurkhanas - to share the memory of loss. And this loss is marked by the period of Moharram, a tribute to a martyr, Hazrat Imam Hussain, the grandson of the Prophet. This is a time of intense grieving, but because there is beauty even in pain, these haunts of sadness have been built with enormous love and care.

The city's oldest such monument is the Badshahi Ashurkhana, and its most immaculately guarded one is the Aza Khana-E-Zohra. The first one was built during the fag-end of the 16th century, but the second one is a mere baby in comparison, and will only complete its first century in the 2030s.

Ashurkhanas house alams, war relics that announce the identity of the ruler during a battle. The Badshahi Ashurkhana, with its ancient mosaics and colonnades, is one of the oldest imambaras of India, and sits opposite the famous Madina Hotel in Old City (a must-stop for biryani-lovers).

The Aza Khana-E-Zora is intricate, grand, and overlooks the once gushing river Musi. Domes sit large and peaceful on this rare, true representation of the Osmanian style of architecture. Sharp carvings and verses from the Quran cover the walls, and green and black is the unchanging motif.

ADVERTISEMENT
This page was tagged for
malkajgiri hyderabad ashurkhana
malkajgiri ashoor khane
The Ashur Khanas of Hyderabad City
darrul shifa museum in hyderabad
aza khana bus stop
Follow @fullhyderabad
Follow fullhyd.com on
About Hyderabad
The Hyderabad Community
Improve fullhyd.com
More
Our Other Local Guides
Our other sites
© Copyright 1999-2009 LRR Technologies (Hyderabad), Pvt Ltd. All rights reserved. fullhyd, fullhyderabad, Welcome To The Neighbourhood are trademarks of LRR Technologies (Hyderabad) Pvt Ltd. The textual, graphic, audio and audiovisual material in this site is protected by copyright law. You may not copy, distribute, or use this material except as necessary for your personal, non-commercial use. Any trademarks are the properties of their respective owners. More on Hyderabad, India. Jobs in Hyderabad.