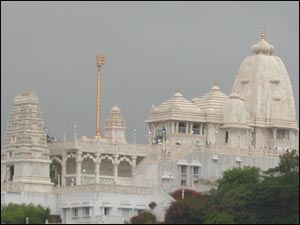 Priyanka Pulla / fullhyd.com
Of all the people who've been there, perhaps the only one who's not totally impressed by the view from the Birla Mandir at night is perhaps the Lord Himself. Arguably, He's seen better. For the rest of Hyderabad, however, for a very long time, going to the Birla Mandir in the evenings was as much of an outing as it was to be in the good looks of its First Citizen.

Hyderabad's most popular temple - at least before Chilkur happened - the Birla Mandir was built in 1976, and is young, fashionably clean (no gooey stickum of mud and water under your feet when you step inside here), made of 100% pristine and super-smooth marble, and surrounded by neat little rose gardens and manicured lawns.

The architecture, too, is a promiscuous, new-age mix: Khajuraho, Utkal, Bodhgaya and South-Indian, so that it has a breezy lightweight, customized-to-suit-your-palate feel, rather than the purebred baroque look of the older temples. No wonder, the Birla temple of Hyderabad has so many takers. From orthodox believers to young couples looking for yet another refuge to enjoy each other's company.

This funny thing about Birla Mandir is that although it is dedicated to Lord Venkateshwara, it is named after one of India's richest industrialist families whose devout munificence it is the product of: the Birlas. The materialistic connotations of its nomenclature notwithstanding, devotees throng here day in and day out, elders and toothless babies in tow. There is Lord Balaji's crowd-pulling ability, and at the pinnacle terrace is the picture postcard view of Hyderabad: the Tank Bund, the Secretariat, and the Basheerbagh flyover with little vehicles zipping on it with an orderliness only a vantage point can bestow on them.

The pure white marble of the structure, imported from Rajasthan, retains its sterile, unsmudged look, through these numerous visits. As you enter, you see the chunks of white dribbling down the craggy rocks of Kala Pahad, like milk from a shivalingam after an abhishekam. There are neat little steps leading up to the top, which stop by terraces in nooks under overhanging rocks.

Next, you cross the rajagopuram (done in South-Indian style), pass through a rather aesthetic-defiling metal detector with harsh-looking wires criss-crossing around it, climb past the Sai Baba temple (which you can come back to see later) and emerge into the main temple precincts.

Like the whipped cream icing on elaborate dessert, this one is the biggest treat of all. People clearly transform once here, and walk around in a devout daze. Images of Vamana, Buddha, Parasurama, Krishna, Mahavir, Chaitanya etc. are carved all around the structure. A brass pillar rises to over 50 feet, and inside is the black granite statue of Balaji, swathed in silks and jewels, hidden away in the dark refuge created by what is outside, a dazzling sunlit gopuram. At night, this whole place is done up in soft lighting, creating the converse effect of a refulgent God welcoming you from your dark surroundings.

You can find your way down from behind, along another equally long flight of stairs. There is a mezzanine sit-out where people squat and rest before leaving. On the way out is a large store, which sells religious books and various pieces of art related to this temple.

Birla Mandir might not be much of as much of an architectural splendor as it is one of the more pleasant, sensually appealing places of religion in Hyderabad. What it is, is really a beginner's temple: beautiful, attractive for its own sake, a place where worship comes easy. With no sweaty jostling with zealous devotees in long queues, subdued (given that a lot of things - from prostrating in front of God to scattering flowers around - are prohibited) and elegant, the temple is a must-visit for more than one reason.

ADVERTISEMENT
This page was tagged for
birla mandir witch year
rose garden to birla mandirrr
Proper Adress of birla temple
birla mandhir adress in hyd
image in birla temple secunderabad
Follow @fullhyderabad
Follow fullhyd.com on
About Hyderabad
The Hyderabad Community
Improve fullhyd.com
More
Our Other Local Guides
Our other sites
© Copyright 1999-2009 LRR Technologies (Hyderabad), Pvt Ltd. All rights reserved. fullhyd, fullhyderabad, Welcome To The Neighbourhood are trademarks of LRR Technologies (Hyderabad) Pvt Ltd. The textual, graphic, audio and audiovisual material in this site is protected by copyright law. You may not copy, distribute, or use this material except as necessary for your personal, non-commercial use. Any trademarks are the properties of their respective owners. More on Hyderabad, India. Jobs in Hyderabad.