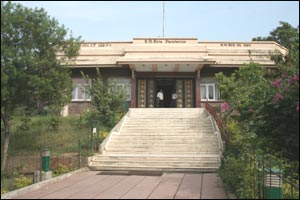 Priyanka Pulla / fullhyd.com
The Naubat Pahad hillock that leads you upto the tiny dome of the Birla Planetarium has been and continues to be a sanctuary for a variety of Hyderabadis looking for a comfy place to spend long hours in inexpensive shade and verdant surroundings. It is mostly the ubiquitous Hyderabadi couples who speckle these slopes like a monkey brigade. Then there are clutches of teenagers who want to hang around longer than their budgets would permit in a Coffee Day.

The Birla Planetarium has a number of credits to its name, but for all its accomplishments, is smaller than you might expect. The gallery has a display of a rather fantastic collection of quotes by and anecdotes about Einstein and some interesting paintings. It also plays host to a number of exhibitions, the most recent one being "Reach Out For The Sky", a photograph display dedicated to Kalpana Chawla and her comrades who perished in the Columbia Space Shuttle tragedy.

Inside is the planetarium theater, with a hemispherical ceiling onto which the images are projected from a rather fancy looking blunderbuss-like projector. Once in, the air-conditioning envelopes you like a cocoon. The shows have not changed much over the years - I remember having seen the same one for 7-8 years till it almost segued into a new one which is very similar but with slight variations. For Rs. 17, though, the excellent reclining seats and the luxurious ambience that swaddles you is already enough value for money.

You are better off avoiding the Telugu shows if you have the option of English. While the visuals are exactly the same, the Telugu voice-over is a gratingly high-pitched, pedagogic and patronizing female one, trying to infuse enthusiasm that only ends up sounding interfering. The English voice-over is much better: calm, baritone, comforting, and serving only to provide information while allowing the visuals to take over the show.

And the visuals themselves are not bad at all. Especially if it is your first time, which it definitely is not for most Hyderabadis. The best impression is the initial one of the Hyderabadi skyline that quickly morphs into a rural Indian one. The massive domed ceiling becomes velvet black with little refulgent diamond specks all across. It might not look like anything you will ever witness your whole life, even in a village, but it is a treat, a perfectly bewitching sight.

Next you get to spot constellations with help from the narrator, although the images zoom by too fast for genuine appreciation. This is followed by a simulated flight through outer space, through images of planets and asteroids, and spotting supernovas, stars, black holes, comets and pulsars. The images often look a little amateur, they are quite simply photographs projected on the dome, taking away the realism of the experience. But the show goes on, and first-timers are often more than happy with the outcome. And patriotic Hyderabadis always are!

ADVERTISEMENT
This page was tagged for
birla planeturium contact number in hyd
birla planetorium address hyderabad
birla planetarium spech
birla planetarium hyderabadcontact numbers
birla planatorium hyderabad timings
Follow @fullhyderabad
Follow fullhyd.com on
About Hyderabad
The Hyderabad Community
Improve fullhyd.com
More
Our Other Local Guides
Our other sites
© Copyright 1999-2009 LRR Technologies (Hyderabad), Pvt Ltd. All rights reserved. fullhyd, fullhyderabad, Welcome To The Neighbourhood are trademarks of LRR Technologies (Hyderabad) Pvt Ltd. The textual, graphic, audio and audiovisual material in this site is protected by copyright law. You may not copy, distribute, or use this material except as necessary for your personal, non-commercial use. Any trademarks are the properties of their respective owners. More on Hyderabad, India. Jobs in Hyderabad.