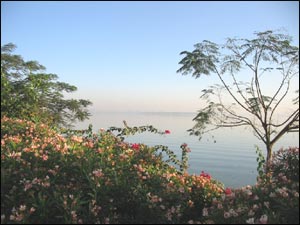 C Venkatesh / fullhyd.com
The aerial view provided by Google Earth's satellite image is striking: a large, craggy, man-made end to the Musi river, South-West of the twin-cities. It's also surprising that the name pops up a fraction of a second before your computer screen names the nearby Osman Sagar. Surprising, since the Himayat Sagar is definitely the lesser of the two lakes that dominate this side of the city and supply potable water to thirsty Hyderabadis.

Together with Hussain Sagar, the lake that's bang in between Hyderabad and Secunderabad, these two hold most of the visible water in this part of the world.

And if in the hot summer months, the visible aqua shrinks a tad, the serenity of the sorroundings is still strong enough to pull consistent contingents. Romeos with their Juliets hanging on tight. Parents with hungry, noisy kids, and their patience hanging on a thread. College kids pulling James Dean imitations, a prayer away from a crash-and-burn. And, of course, folks hunting for a decent plot of land to buy.

It's a very pleasant drive once you get past Langar House. Turn left at the Sarvatra Park - as the signs say, this is the way to Chilkur. Stop at the imposing Gun Park and look back for one of the best views of the Golconda Fort before you drive on.

It's recommended that you drive, by the way, since public transport is not the most reliable in this outreach.

Several more kilometers gets you to the Kalimaatha Temple where the road forks. Left is the load less traveled - which eventually loops back to the Himayat Sagar - while straight takes you to the AP Police Academy. The last decent restaurant is at the start of the Police Academy. And yes, the last decent Petrol Station was way back at Langar House, so you'd better hope your fuel tank looks fuller than your wallet.

Immediately after the Police Academy, turn left. And a few hundred meters later, you're at the Himayat Sagar.

There's a Government Guest House but you need permission to use it. Apart from this, there's nothing to do but "enjoy" as the locals put it. Enjoyment, in these parts, consists of parking on one of the several benches that line the promenade and prating till the jaws ache.

There's a sign at the dam that lists facts that can only be of interest to civil engineers or parents getting their own back at their kids: a 505 square mile catchment area, a 7.6 square mile reservoir area, a 7,400 foot long dam, and so on right down to the spellbinding fact that the dam is 111 feet above the foundation.

There's a park at the far end of the dam, complete with an extremely optimistic sign from the HMWSSB that demands 5 bucks for entrance and sternly reminds you that working hours are from 8AM to 5PM. If you're conscious on your civic responsibilities, you'll have to find some amiable fellow tourist willing to take your 5 bucks, since there's no one tending the park at any hour.

The lake's been known to play host to migrating ibises, flamingoes, and various storks and ducks. As you lean on the railing and watch the birds patiently wait for their food, you're well within your rights to feel envious. Not only are the birds enjoying sylvan surroundings that you can only dream about, they have a better chance of getting victuals than you have.

The Himayat Sagar is purely for true believers in Balzac's "I prefer thought to action, an idea to an event, reflection to activity."

ADVERTISEMENT
This page was tagged for
osman sager govt office
Sagar names
himayat sagar map download
distance from gunpark to sanathnagar
osman sagar govt gust house
Follow @fullhyderabad
Follow fullhyd.com on
About Hyderabad
The Hyderabad Community
Improve fullhyd.com
More
Our Other Local Guides
Our other sites
© Copyright 1999-2009 LRR Technologies (Hyderabad), Pvt Ltd. All rights reserved. fullhyd, fullhyderabad, Welcome To The Neighbourhood are trademarks of LRR Technologies (Hyderabad) Pvt Ltd. The textual, graphic, audio and audiovisual material in this site is protected by copyright law. You may not copy, distribute, or use this material except as necessary for your personal, non-commercial use. Any trademarks are the properties of their respective owners. More on Hyderabad, India. Jobs in Hyderabad.