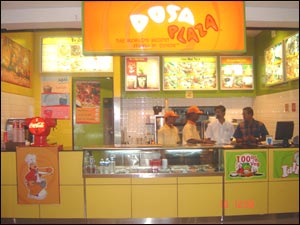 Ghazala Rizvi / fullhyd.com
In the age of e-biz and fast-is-good, most businesses are smitten or bitten by ideology of one kind or the other. Dosa Plaza believes in De Bono's Lateral Thinking, shattering the horizons, and several other such things which, plainly put, mean doing simple things in a complex manner... or maybe the other way around.

Anyway, taking the batter in hand, it can be made into just about anything, one of them being the Indian Dosa. When effort and thought is spent on the matter, it can even be made into something more - a Mexican Roast or an American Delight Dosa.

At Dosa Plaza, they have gone a little further. Making the art of dosa-designing an exacting virtue, they have fashioned 104 varieties of hot and yummy dosas, including Mushroom Chopsuey Dosa With Cheese and Idli Schezwan. 27 of these have already been registered for trademark.

Prem Ganpathy, the founder and MD, was born in a remote village in Tamil Nadu. After an ordinary childhood, and when it was time to earn his own bread, he decided to do some baking. Robbed and left stranded in Mumbai, Prem started at the lowest rung, putting up a dosa-stall in Navi Mumbai. Franchise upon franchise was added, as Prem successfully experimented with Chinese, American and Mexican tastes.

True to his spirit, at Dosa Plaza, the specialty is the humility of the staff. The rare combination of efficiency unblemished with attitude is a striking feature of the place. The bearers don't walk around with smug-college-kid-on-summer-job faces, and they do not wear the irritability of worn-out losers in life.

The decor is warm and welcoming, and from the furniture to the lighting, everything is easy on you. Dosa Plaza shares building space with at least two banks - more by destiny than design, as here you will not be in need of urgent funding. A heartening meal can cost you not more than Rs. 250, while leaving a lingering taste of fulfillment.

This is certainly not a place for those who take their roots and shoots seriously. A hardcore South-Indian might like his vadas and idlis as they came during his grandma's regime, but the hip upcoming Gen-X might just be over-excited with something called the Schezwan Dosa and American Chopsey Dosa.

So, banking on the palate evolution that we Indians are constantly undergoing, Dosa Plaza plans to remain in business for times to come. And yes, they serve South-Indian staples in their original avatars, too.

ADVERTISEMENT
This page was tagged for
telugu caramel stores
Dosaplaza Hyderabad, Telangana
maharaja addrss
Panner Dosa Plaza Hyderabad, Telangana, India
Dosa Plaza hyderabad bad
Follow @fullhyderabad
Follow fullhyd.com on
About Hyderabad
The Hyderabad Community
Improve fullhyd.com
More
Our Other Local Guides
Our other sites
© Copyright 1999-2009 LRR Technologies (Hyderabad), Pvt Ltd. All rights reserved. fullhyd, fullhyderabad, Welcome To The Neighbourhood are trademarks of LRR Technologies (Hyderabad) Pvt Ltd. The textual, graphic, audio and audiovisual material in this site is protected by copyright law. You may not copy, distribute, or use this material except as necessary for your personal, non-commercial use. Any trademarks are the properties of their respective owners. More on Hyderabad, India. Jobs in Hyderabad.