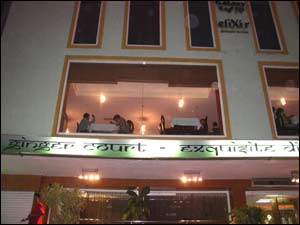 EDITOR RATING
7.5
Food
Service/Courteousness
Ambience
Value For Money
7.5
7.5
7.5
7.5
Suggestions
Good for date/family
NA
Easy parking
NA
Long waiting
NA
The Scene
Ginger Court is amongst the more popular restaurants in Madhapur, and if you get lost around Cyberabad, this is a good place to be found at. Part of the reason for the popularity is lack of competition - the best eatouts are all in Banjara Hills or Secunderabad. It is also the variety - almost 200 dishes spanning Indian, Continental and Chinese, and self-respecting winelist. But primarily, it helps that you can double-click on the ambience you like - there are 4 different options to choose from in this food court, on 4 floors.

Bytes downstairs with its muted lighting and soft demeanor is the subtlest of the lot, and can seat about 50 in its 10-12 tables. Families and mushy stuff find their best perch here. Ginger Court on the 1st floor is brighter, bigger and more boisterous, and with its TV and soft music, is more party-type - it is for all the other junta (mostly the Madhapur techie crowd) who also like a little smoking and drinking to go with their food.

On the other hand, Elixir, a lounge bar on the 2nd floor, is for people who like a little food to go with their smoking and drinking. A spacious lounge bar, it is softer in lighting, louder in music and lower in seating. You can watch TV or cosy up in a corner with whoever you like to cosy up to. And Galaxy, the roof-top diner and bar, is arguably the most popular of the lot, and provides the starry terrace experience.

The Food
It's always a pleasure to see an elaborate menu unless for some reason you need to by-heart everything you see. Ginger Court serves Indian, Chinese and Continental, and like we said, lists 200 items between them. Which means there is every standard name you can think of, and some that you cannot. Salads and starters average Rs. 100-120, and main course items can cost Rs. 120-250 (seafood, as always goes up much higher).

Chinese presents some specialties too, including Willow Chicken, Konjee Crispy Lamb and Drunken Prawn Soup. However, it's relatively standard names here in a 50-item list. The continental section is relatively frugal, with just about a dozen offerings, including a stroganoff, a shashlik, a croquette and a pasta. The desserts include some ice cream and standard Indian names like Darsaan, Rasmalai and Qubani Ka Meetha.

It's unlikely anyone will tell you he ate his best meal at Ginger Court, but nobody bitches about the food either. It's mostly average fare, and you go there mostly since it does make you feel like you're eating out. A good winelist helps things. It's also usually bustling, and the many women - even in Elixir - provide important endorsement.

ADVERTISEMENT
This page was tagged for
ginger court madhapur images
ginger court restaurant maps
Ginger Court
ginger court contact number
cost of vodka in ginger court madhapur
Follow @fullhyderabad
Follow fullhyd.com on
About Hyderabad
The Hyderabad Community
Improve fullhyd.com
More
Our Other Local Guides
Our other sites
© Copyright 1999-2009 LRR Technologies (Hyderabad), Pvt Ltd. All rights reserved. fullhyd, fullhyderabad, Welcome To The Neighbourhood are trademarks of LRR Technologies (Hyderabad) Pvt Ltd. The textual, graphic, audio and audiovisual material in this site is protected by copyright law. You may not copy, distribute, or use this material except as necessary for your personal, non-commercial use. Any trademarks are the properties of their respective owners. More on Hyderabad, India. Jobs in Hyderabad.