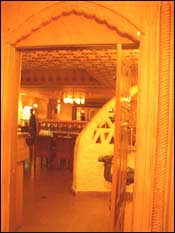 EDITOR RATING
8.0
Food
Service/Courteousness
Ambience
Value For Money
8.0
6.0
7.0
NA
Suggestions
Good for date/family
NA
Easy parking
NA
Long waiting
NA
Perhaps not as popular as its neighbour Malgudi, or even Haveli for that matter, one of the reasons Kabura still keeps its diners coming back is its mouth-watering range of kebabs, and the famous Dumpukht Biryani.

Dimly lit and with a kind of somber and overdone decor, Kabura doesn't look very promising at first glance. But it's lasted out a healthy 3 years (by 2005). The menu has stayed true to its claim of authentic North-West Frontier cuisine, but now Kabura also has a buffet, featuring the more popular South-Indian and Chinese dishes. Throw in a complimentary drink, and it's a pretty good deal at Rs. 125 per person.

One of the interesting items on the menu at Kabura is the selection of shorbas (a thick, bland soup). The Multani Shorba is a variation of the vegetable stew, and other than that you'll like the Murgh Kabuli Shorba and the Hyderabadi Nalli Shorba (mutton soup).

The kebabs also come in some innovative forms, and if you're a vegetarian, you'll enjoy the cheese-stuffed Aloo Nazakat or the more common Tandoori Paneer. Also try the Machli Banu or the tangier Machli Ajwain, if you like seafood. But the most preferred kebab of the platter would be the Murgh Peshawari or the Murgh Pannu, which is minced chicken stuffed with cheese. The crunchy Kadak Sheekh Kebab goes down great with a drink.

Kabura also has a decent selection of biryanis, of which most people are partial to the Dumpukht Biryani, although the boneless Murgh Akbari and Kheema Biryani both come a close second. If you'd rather go the roti way, try the fancy Kabuli Naan - with lots of dry fruits -, the stuffed Kheema Naan, the most requested Cheese Naan, or the Rohini, which is like a pizza with tomato and capsicum topping.

The naans team up great with the Sabzi Saloni (mixed veg in gravy) or Paneer Afghani. Not too much new in the gravy boat, and you'd be happier sticking to the safe Kadai Chicken or Gosht Lajawab. But the Murgh Akbari - in a spicy and rich gravy - has quite a few takers too. As does the Dal Kabura, which is a combo of black dal, butter beans, and the ubiquitous cheese topping.

The food here tends to be quite heavy, and a glass of Kabuli Lassi or Kabura's special Chaas - with chaat masala and some wonderful mystery herbs - might be a good idea to swig along with your meal. After all, you don't want to be too stuffed when you get to dessert, which has a couple of finger-lickin' Indian sweets. Like the creamy, super-sweet Makhni Kheer, the North-Indian delicacy Phirni, or the Shahi Tukda, which is bits of bread soaked in spiced milk and tossed with dry fruits.

ADVERTISEMENT
This page was tagged for
PANEER KABURA
kabura restaurant buffet cost hyderabad
multani shorba
kabura hills
kabura mutton
Follow @fullhyderabad
Follow fullhyd.com on
About Hyderabad
The Hyderabad Community
Improve fullhyd.com
More
Our Other Local Guides
Our other sites
© Copyright 1999-2009 LRR Technologies (Hyderabad), Pvt Ltd. All rights reserved. fullhyd, fullhyderabad, Welcome To The Neighbourhood are trademarks of LRR Technologies (Hyderabad) Pvt Ltd. The textual, graphic, audio and audiovisual material in this site is protected by copyright law. You may not copy, distribute, or use this material except as necessary for your personal, non-commercial use. Any trademarks are the properties of their respective owners. More on Hyderabad, India. Jobs in Hyderabad.