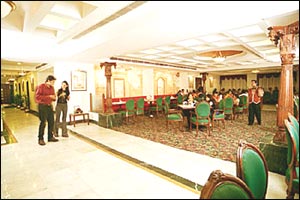 C Venkatesh / fullhyd.com
EDITOR RATING
6.0
Food
Service/Courteousness
Ambience
Value For Money
6.0
6.0
6.0
NA
Suggestions
Good for date/family
NA
Easy parking
NA
Long waiting
NA
The designer merits an award or two for courage, that's certain. A remarkable color scheme and an intriguing choice of motifs for the walls are the buildup to the eye-catching bill-of-fare, featuring dishes with exotic names like "Gina Lolla Brigade". The Venue, the vegetarian multi-cuisine restaurant of The Residency, is adventurous in its reach, which sometimes exceeds its grasp.

The Scene
Fresh from a makeover, this restaurant used to be called the Madhuban. The broom that swept in the new name has not made too many changes to the rest of the place. It still has that certain level of informality that is usually the result of familiarity breeding. Hotels that have restaurants usually permit, if not encourage, a degree of informality among the diners. Sometimes this rubs off onto the waiters, too.

The large air-conditioned room that houses the restaurant is well-lit and spacious. There's the mandatory TV perched near the buffet table, and yes, there's a large buffet table at one end.

The customers are often business travelers. Families are rare, and those that are spotted tend to be residents. This can be a little disconcerting to a diner looking for a night on the town, but that's not what this place purports to be anyway. That's a bit of a surprise, considering the pub draws in a large number of the city's youth brigade, with live music and all.

A working-restaurant for business-travelers: that's what the Venue claims to be, and that's exactly what it is.

The Food
While the hoi polloi are unlikely to be able to match the panache of Hannibal Lecter who once said that he was having an old friend for dinner, the menu offers a tempting "Gina Lolla Brigade". There are lots of other intriguing plays on names from the "Farinauxe" to the "Beat Root". While the latter is probably inadvertent, the spirit of adventure gleams bold from every page of the menu.

Gina, by the way, consists of macaroni, tomato and spinach. C'est la vie.

There's a generous buffet at lunch times. At Rs. 177 inclusive of taxes as we write this, it's slightly more money than value. The spread varies, but is staunchly vegetarian. As is the entire restaurant, standing out like an oasis for the hungry vegetarians lost among the dunes of biryani houses that dot this area.

Indian, South-Indian, Oriental, Western the menu boasts of 'em all. And no, we are too, as to why "Indian" is different from "South-Indian".

You have the choice of the usual soups, including a slightly ambitious attempt at Tom Yum at about Rs. 50 each. The Sesame Gold Coin is one of the nicer starters, which run to about Rs. 100 per dish. If you're game for a salad (or Sehatnaama, as per the menu) try the Chef's Symphony. Most of the main course consists of the de riguer combinations at multi-cuisine vegetarian restaurants. They don't stand out one way or the other.

The continental fare is a little better, mainly because of the overwhelming effects of tomato ketchup. The rice tends to be a shade dry, and, like many of the other dishes, passes muster, but leaves you with the lingering feeling that it could be better.

For desserts, try the the Baked Rabdi Boondi. It's different.

ADVERTISEMENT
This page was tagged for
Nampally Restaurants / Bars
Venue reviews
email, maps, directions, landmarks
Venue telephone
Follow @fullhyderabad
Follow fullhyd.com on
About Hyderabad
The Hyderabad Community
Improve fullhyd.com
More
Our Other Local Guides
Our other sites
© Copyright 1999-2009 LRR Technologies (Hyderabad), Pvt Ltd. All rights reserved. fullhyd, fullhyderabad, Welcome To The Neighbourhood are trademarks of LRR Technologies (Hyderabad) Pvt Ltd. The textual, graphic, audio and audiovisual material in this site is protected by copyright law. You may not copy, distribute, or use this material except as necessary for your personal, non-commercial use. Any trademarks are the properties of their respective owners. More on Hyderabad, India. Jobs in Hyderabad.