RV - The Rendezvous For Fine Dining 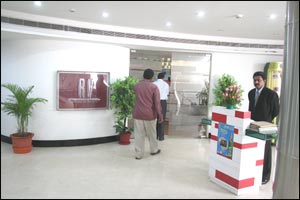 C Venkatesh / fullhyd.com
EDITOR RATING
6.0
Food
Service/Courteousness
Ambience
Value For Money
6.0
6.0
5.0
NA
Suggestions
Good for date/family
NA
Easy parking
NA
Long waiting
NA
The guys who run the Celebrity Club have the first part down pat: get a good place and do it up well, create the buzz, and the crowds will come in. Where they seem to flag a little is in the second part: keeping it done up well, keeping the buzz going, and keeping the crowd that comes in.

The Scene
The Prajay Corporate House is home to a lot of things a hotel, a gym, a bar, and, oh, yes, a restaurant. It'll easily take a couple of minutes for you to figure out how to reach the restaurant. One of the two lifts doesn't stop at the 5th floor for some strange reason. The stairs go to all floors, but lots of other things seem to go on the stairs which you're better off being in the dark about. The lift itself can certainly be better maintained. In fact, this feeling can be better maintained - is likely to be the dominant theme of your evening or afternoon out.

The 5th floor is home to the gym - Fitbuzz - and the bar that's called a Music Lounge - 99 MegaHertz - as well as the restaurant itself. There's a large, common lobby that opens off to all three, with loud music pounding out the directions to the bar. The lobby is very brightly lit. Thankfully, since it will reassure the feminine side of your group, if they're intrepid enough to come here. Regretfully, since it highlights ageing-signs in the dcor.

Rendezvous itself is brightly lit too. With lots of noise and lots of smoke. And lots of music filtering in from 99 MegaHertz, overwhelming the relatively feeble attempts of the piped music. And yes, they take Sodexho passes.

The Food
Even the staff seem to feel that this is an extension of the bar. It doesn't seem to make much sense to them that you'd come here to just eat, and by and large the diners seem to be in genial agreement. Teetotalers will feel like PETA activists at a foxhunt. The various cocktails will let you back by about Rs. 150 each. Sadly, there's no draught beer available.

There's a lot of food listed. Chinese, Continental, Indian, Tandoori and Thai are all on call. And perhaps because the margin's been covered by the liquid diet, the food's surprisingly low priced. No, you're not sozzled just yet the rotis really are just 10 bucks apiece.

Belying the name, there're no Epicurean delights available. The waiters will quickly and effectively disabuse you if you harbored any such illusions. They're charmingly ignorant of the origins of any of the dishes, and are firmly insistent that there are no recommended dishes or accompaniments.

Since you're being adventurous anyway, try a mix-and-match of cuisines. The Texas Hot Pot to get things going followed by a Red Thai Curry, some Biryani, and a Celebrity Coup for the sweet tooth will leave you full, that's for sure. "Full of what", is a question you can ruminate on on the way down, and in the days that follow.

And if you are an early bird, try the breakfast buffet - a melange of Southie tiffins, toast, cereal, omelet, choice of milk (Boost, Nutramul, flavored) and a dessert make for a compelling proposition for Rs. 70. Yes, you read that right.

ADVERTISEMENT
This page was tagged for
RV hotel begumpeta
rv begumpet
rv restaurant
new fine dining restaurants jobs in hyderabad
rv restaurant hyderabad
Follow @fullhyderabad
Follow fullhyd.com on
About Hyderabad
The Hyderabad Community
Improve fullhyd.com
More
Our Other Local Guides
Our other sites
© Copyright 1999-2009 LRR Technologies (Hyderabad), Pvt Ltd. All rights reserved. fullhyd, fullhyderabad, Welcome To The Neighbourhood are trademarks of LRR Technologies (Hyderabad) Pvt Ltd. The textual, graphic, audio and audiovisual material in this site is protected by copyright law. You may not copy, distribute, or use this material except as necessary for your personal, non-commercial use. Any trademarks are the properties of their respective owners. More on Hyderabad, India. Jobs in Hyderabad.