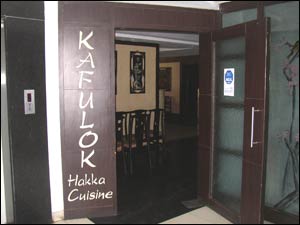 Piya Bahadur / fullhyd.com
There is Prithvilok, there is Devlok, and then there is Kafulok - perhaps where the Kafus reside on Road No. 12? Well, even if that doesn't sound quite right, Kafulok, which is actually an amalgamation of Ka (Family), Fu (Fortune) and Lok (Happiness), would still provide some mean Drums of Heaven.

The Scene
The restaurant is rather precariously placed in the middle of some daunting piece of Oriental cuisine real estate indeed. Flanked by Zafran Exotica, Little Penang, and Awaana, and a stone's throw from Ohri's Far East, Kafulok faces stiff competition for its Hakka fare.

While the decor, location and service are adequate, the ambience is neither extravagant nor romantic like at Exotica upstairs, nor raunchy and experimental like at Little Penang downstairs. This is quite as middle-of-the-road Chinese family restaurant as they get.

The Food
For lunch, Kafulok offers a winningly-priced buffet for Rs. 123, which includes starters, beverages, salads, soups, vegetarian and non-vegetarian entrees, rice, noodles and desserts. Fortunately for the diner, all the dishes served do not tend to taste bandi Chinese-like, but the food is also not up there like at some of the stellar old-time Chinese joints in town.

While there, try something from their Home Recipes section of the menu, which features dishes like a generously portioned Steamed Chicken at Rs. 250, Garlic Steamed Fish, Moon Faan, and a rice dish at Rs. 130 - all of which reportedly the Chinese eat at home.

ADVERTISEMENT
This page was tagged for
Zaika Restaurant Vidyanagar ka phone contact number
www.kafulokchineserestaurant.com
china bistro hyderabad address
kafulok Chinese restaurant in Hyderabad contact
KAFULOK
Follow @fullhyderabad
Follow fullhyd.com on
About Hyderabad
The Hyderabad Community
Improve fullhyd.com
More
Our Other Local Guides
Our other sites
© Copyright 1999-2009 LRR Technologies (Hyderabad), Pvt Ltd. All rights reserved. fullhyd, fullhyderabad, Welcome To The Neighbourhood are trademarks of LRR Technologies (Hyderabad) Pvt Ltd. The textual, graphic, audio and audiovisual material in this site is protected by copyright law. You may not copy, distribute, or use this material except as necessary for your personal, non-commercial use. Any trademarks are the properties of their respective owners. More on Hyderabad, India. Jobs in Hyderabad.