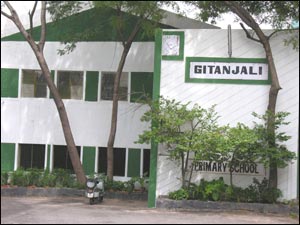 C Venkatesh / fullhyd.com
The Pincer Movement, says Wikipedia, is a basic element of military strategy which has been used, to some extent, in nearly every war. Whether by design or by coincidence, Gitanjali School's locations doubly envelop the Hyderabad Public School. Fitting, since it is the HPS that Gita Karan left to start Gitanjali School in 1985.

The name is an inspired choice. Remember that this is the poem that led Yeats to talk of the subtlety of rhythm, of untranslatable delicacies of colour. The Primary School Building seems, then, a strange location to house this school. It lies cheek-by-jowl with a rambunctious apartment building, literally a stone's throw from the Begumpet Railway Station. It has the disadvantage of location, the fetters of choked space, and the occluded and noxious Nala that carries fetid effluents to slowly poison the Hussain Sagar, to contend with. The building itself is functional rather than poetic, as is the other, the Senior School, that's in Mayuri Marg - dead opposite the HPS' Gate.

But for every poem in form you can find a poem in function. Gitanjali, despite these disadvantages in form, has functioned effectively for 20 years now. Effectively enough to have provided a welcome alternative for the city's bourgeois. Affiliated to the ICSE Board, Gitanjali School has built a formidable corps of teachers. Capable, no-nonsense, result-oriented, and benevolent martinets.

The student body is well-formed, too. Uniformed kids are encouraged to interact and compete on modern-day adaptations of the playing fields of Eton. They have a wide range of hobbies to choose from, while parents can draw comfort in the reasonable fees - Rs. 12,000 to Rs. 15,000 per year.

Second generation Hyderabadis aver that the school is better than the St. Ann's / HPS / other that they went through. Admission is probably as hard, but it's better in most other respects. The teachers are warmer. The management is more accessible. The kids have more fun. The teaching methods are better. The ...yes, it is decidedly better.

But the same second generation Hyderabadis also harbor lingering doubts. Will the expansion of Gitanjali School reduce the attention the management pays to this one? Are the +2 teachers capable of getting our kids to one of the educational El Dorados?

The first of these worries seems unjustified. The school is expanding, though diversifying may be more the mot juste. The new schools are entirely different, except that they share the same Founder Principal. However, there's no sign of slacking off at Gitanjali. Shoulders are still hard at the wheel, noses firmly held to the grindstone.

The school has recently added a +2, allowing children to take the ISC Board exams. The jury's still out on its pertinence, though that's not Gitanjali's fault. The fault lies in the same psyche that leads parents to voice, if sotto voce, the second doubt: Excuse me, Mister, is this the road to the Shangri La?

It's strange, even funny in a Mark Twain sort of way, how 7 years can change parents' perceptions of the schooling needs of kids.

It's probably the benevolence of Gitanjali's teachers that stirs middle-class parents to wonder whether they should, in fact, turn to more rigid boot-camps to prepare their kids for the journey beyond childhood. This is the sort of doubt that has built the coaching class to a multi-crore business. And it's certainly to Gitanjali's credit that it has maintained an even keel, holding on to what it has demonstrated is a successful model.

Not quite an alternate school, and a shade removed from the conventional schools, Gitanjali has built a firm reputation for itself.
Share. Save. Connect.
Tweet
GITANJALI SCHOOL SNAPSHOT
EVENTS AT GITANJALI SCHOOL
There are no events at Gitanjali School scheduled currently.
GITANJALI SCHOOL USER REVIEWS
1 - 4 OF 4 COMMENTS
POSITIVE  |  NEGATIVE |  NEWEST  |  OLDEST  |  MOST HELPFUL  |  LEAST HELPFUL
USER RATING
1.0
1 USER
Quality
Ambience
Service/Courteousness
Value For Money
NA
NA
NA
NA
RESPONSIBLE PARENT on 1st Jul 2016, 7:43pm | Permalink
HI EVERYONE
I STRICT NO TO GITANJALI SCHOOL.MY KID IS IN HERE.HE IS A MERIT STUDENT BUT MRS. RICHA CLASS 5 TEACHER IS A TOTAL PARTIAL POLITICAL DRIVEN BITCH.SHE MANIPULATED MARKS AND GIVEN THE RANK TO SOME OTHER CHILD OF HER INTEREST. EVEN IF UR CHILD IS IN GITANJALI PLS SEE THAT UR CHILD IS NOT IN HER CLASS.AND THE MANAGEMENT IS NOT BOTHERED ABOUT CHECKING .
sarayuk on 19th Jun 2013, 12:47pm | Permalink
Hi everyone,
My kid is studying in gitanjali..we are very much satisfied with the studies part. But onething which is bothering us is the school building.Frankly speaking we were not aware of this construction plan at the time of joining. otherwise we would have looked for some other school.PP1 is on1st floor ,PP2 is on 2nd floor , 1st standard on 3rd floor and so on.. i dont really understand how management expectssuch small children to climb steps everyday..moreover kids are made to climb up and down for 2 or more times..be it for handwash or toilets or sports period.Kids are not allowed to take the lift also."It is only for Teachers".Now the school looks more like an apartment
Kids are not able to concentrate on studies and other activitiesbecause of physical strain.Management and teachers seem to be least bothered about this as they are confident of getting new admissions even if existing children go out.
If anybody asks me whether to join their kid in Gitanjali , i would say a strict NO to it.i would rather suggest any small school that is nearby , where kids ,their studies ,their health is taken care of. Also where there is respect for parents. I would not blame all the teachers but there are few teachers in gitanjali who are harsh on parents and children.

So parents, while putting your child in any school dont blindly go with the brand name..have a look at the building,,talk to the HM or teachers..i seriosly feel that any small school that is nearby my place or government school is far better than these so called branded and big schools

ADVERTISEMENT
This page was tagged for
gitajali high school phone no , address
Gitanjali school timings
Gitanjali Senior Secondary kids
geetanjali junior college opposite hyderabad public school
gitanjali priprimary brahmanwadi begumpet
Follow @fullhyderabad
Follow fullhyd.com on
About Hyderabad
The Hyderabad Community
Improve fullhyd.com
More
Our Other Local Guides
Our other sites
© Copyright 1999-2009 LRR Technologies (Hyderabad), Pvt Ltd. All rights reserved. fullhyd, fullhyderabad, Welcome To The Neighbourhood are trademarks of LRR Technologies (Hyderabad) Pvt Ltd. The textual, graphic, audio and audiovisual material in this site is protected by copyright law. You may not copy, distribute, or use this material except as necessary for your personal, non-commercial use. Any trademarks are the properties of their respective owners. More on Hyderabad, India. Jobs in Hyderabad.