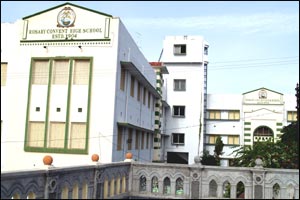 Ghazala Rizvi / fullhyd.com
If your closest encounter with the sisterhood has been through a screening of Whoopie Goldberg's Sister Act sequels, you must think twice before venturing into one such, almost heavenly institute. But if you yourself have done years being grilled in a convent, you know, despite appearances, that your child has an even chance of coming out of the gates sporting a refined personality, even if with some crude notions on life.

Taking canonization rather seriously, the Franciscan Missionaries Of Mary established the Rosary Convent High School in 1904 right atop Gunfoundry, the ammunition center of the erstwhile Nizams of Hyderabad. While Abid, a valet of Nizam VI, was creating ripples in the vicinity with his newly opened shop, the Rosary Convent Sisters were working hard to teach the young begums matters other than shopping.

A hundred years down the line, the school has produced high achievers like Parthasarthy, Managing Director of HUDA as we write this in 2005; Della Gordrey, MLA; Mulini Reddy, Arjuna Award Winner; Seetha Reddy, Chairman of the Zilla Parishad; K Pronoti Suhasani, Director, SEERT; and several others.

Initially started as more of a finishing school, the Rosary Convent now has, in addition to its academic activities, weekly club activities including aerobics, yoga, karate, volleyball, basketball and table tennis. More rigorous games are not encouraged, either due to the lack of an adequate playground or the propriety concerns of the Church - a fact not considered important by the hundreds of aspiring parents, who assault these Pearly Gates for their children's admissions.

ADVERTISEMENT
This page was tagged for
lkg rosary convent school hyderabad
rosary school abids hyd results
www.rosaryconvent.com
rosary convent high school annual day 2017
rosary convent high school magzine
Follow @fullhyderabad
Follow fullhyd.com on
About Hyderabad
The Hyderabad Community
Improve fullhyd.com
More
Our Other Local Guides
Our other sites
© Copyright 1999-2009 LRR Technologies (Hyderabad), Pvt Ltd. All rights reserved. fullhyd, fullhyderabad, Welcome To The Neighbourhood are trademarks of LRR Technologies (Hyderabad) Pvt Ltd. The textual, graphic, audio and audiovisual material in this site is protected by copyright law. You may not copy, distribute, or use this material except as necessary for your personal, non-commercial use. Any trademarks are the properties of their respective owners. More on Hyderabad, India. Jobs in Hyderabad.