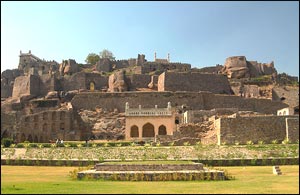 Deepa Menon / fullhyd.com
Golconda is more than just the Fort; it's a little city in itself. Enter the huge iron gates, rusted in place for centuries, and you'll discover a community with its own schools, cafes and wedding halls. This was, after all, the original kingdom before Hyderabad. And where a shepherd boy once found a magic idol, there now stands a crumbling fort.

Once you reach the gates of the Fort, you'll find yourself propositioned by tourist guides who are full of old, fascinating stories, most of which are pure bullshit. But indulge them, and you're poorer by Rs. 250 (Fixed Rate, No Bargaining) and full of some quite plausible tales.

A typical tour of the Fort starts with clapping your hands in the Grand Portico, walking up around 300 steps, and stopping on the way to squint around in prison cells and peer down ancient wells that are now choked with the garbage of a million indifferent tourists. As you make your way up to the Durbar Hall, almost a kilometer away from the Portico and where that earlier clap resounds, you'll chance upon some sweeping views of the city.

A few things everyone will tell you about the Golconda - acoustics, diamonds, secret passages. The first refers to the design of the Fort, which served an important function in days before the intercom. The second detail is mentioned with some wistfulness for a time when Golconda's diamond mines were the only ones in the world. Legendary rocks like the Kohinoor and the Jacob have been unearthed here.

The third and most intriguing issue of the secret passages is nothing more than a good story, because even if these rumored routes to the Charminar existed, the authorities have now walled up any seemingly furtive pathways to avoid accidents or mischief.

Speaking of mischief, vandalism and a my-father-what-go attitude covers every last bit of the Fort today. People either litter indiscriminately or hack their names on the beautiful old walls. The Durbar Hall, situated on top of a small hillock, bears the full brunt of this cruelty.

Everyone, including the guides, knows the extent of damage, but they won't be bothered to do anything. They'd rather sell you chips and soft drinks, so that you'll have something to munch on as you strain desperately to catch a glimpse of the Charminar from the terrace of the Durbar Hall. This Hall was where the royal couple held court with the commoners, and is the last stop on your tour after the rock-hewn Kali temple.

If you intend to stay around for the popular Sound & Light Show, remember to slather on that mosquito repellant. You don't want anything to distract you from what's about to unfold. The voiceover for the show is done by Amitabh Bachchan, accompanied by a couple of children, who'll take you through the cobwebbed corridors of Golconda's history; an era of royalty, espionage and romance. Blueprints of invasions past, tales of royal impetuousness and nobility, and entranced performances by courtesans, Taramati and Premamati - all whiz past you in a flurry of color, light and shadow.

And in case you have some time to spare before the Sound & Light Show, drop by at a 1,000-year old relic near the Fort, an enormous gnarled old tree, the African baobab. It's surrounded by disinterested locals and little boys of the neighbourhood who prefer to splash about in the pond nearby than swing from its branches. Rumors of treetop ghosts don't help.

Sound & Light Show, 55min
English: 7pm, daily
Telugu: 8:15pm, Mondays, Wednesdays & Fridays
Hindi: 8:15pm, Tuesday, Thursday, Saturday, Sunday
Share. Save. Connect.
Tweet
GOLCONDA FORT SNAPSHOT
EVENTS AT GOLCONDA FORT
There are no events at Golconda Fort scheduled currently.
GOLCONDA FORT USER REVIEWS
1 - 4 OF 4 COMMENTS
POSITIVE  |  NEGATIVE |  NEWEST  |  OLDEST  |  MOST HELPFUL  |  LEAST HELPFUL
USER RATING
9.3
8 USERS
Quality
Service/Courteousness
Value For Money
9.4
8.8
9.0
shilpa on 13th Oct 2014, 11:44am | Permalink
the golconda fort is an historicle place to visit.golconda was built by kakathiya's.totallly there are 4 forts in hyd.this is an peacefull place.
this is an very big place we can enjoy alot going with friends, families, the other country or other state people comes here and enjoy's alot.
i saw the golconda with my friends and with my family. we enjoyed the environment and the some sound magics of the golconda fort's special attractions.

I enjoyed reading your articles on various tourist places in hyd.

ADVERTISEMENT
This page was tagged for
golconda Fort adress
www.golkonda map adrass.com
Adress golconda fort
golconda to kokatpalli addres/
golkonda fort helpline number
Follow @fullhyderabad
Follow fullhyd.com on
About Hyderabad
The Hyderabad Community
Improve fullhyd.com
More
Our Other Local Guides
Our other sites
© Copyright 1999-2009 LRR Technologies (Hyderabad), Pvt Ltd. All rights reserved. fullhyd, fullhyderabad, Welcome To The Neighbourhood are trademarks of LRR Technologies (Hyderabad) Pvt Ltd. The textual, graphic, audio and audiovisual material in this site is protected by copyright law. You may not copy, distribute, or use this material except as necessary for your personal, non-commercial use. Any trademarks are the properties of their respective owners. More on Hyderabad, India. Jobs in Hyderabad.