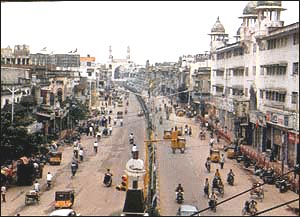 C Venkatesh / fullhyd.com
Crowded. Noisy. Redolent. Anarchic. Or, quite simply, the Mother of all Irani Cafes.

The Scene
There are several other restaurants in town that are worth a note for the biryani they dish out. But the ethos of Madina is inimitable. This is not the Cunard or the Queen Elizabeth II, where the etiquette is as sharp as a knife. This is a tramp steamer where the house rules demand that you spit on the deck and call the cat a bastard and pick your teeth with a marline spike.

The building itself is large in absolute terms, and absolutely gigantic, relative to any other Irani Café in the city. It's as much of a landmark as the Osmania Hospital, the High Court, the Salarjung Museum and the Chowmohalla Palace. And like these worthies, it's right where a part of Hyderabad's heritage should be: a stone's throw from the Musi, and a short swagger from the Charminar. Ask for direction to Charminar, and it's a dead cert that the Madina Hotel will figure in the direction you're given.

The Madina Hotel building is a big, ugly, square block that unfortunately sets the tone for a string of similarly crude buildings on the road to Charminar. The builders, over 50 years ago, certainly picked the wrong model to follow. None of the regal domes that characterize Islamic architecture. This is the "homely" bride of the matrimonials.

It hosts more than just the restaurant. There's the promise of lodging in the upper stories, and Lord knows how many shops or offices or residences. The restaurant takes up the corner of the Ground Floor, and a part of what could be called the Mezzanine, but is disarmingly labeled the Family Room. The bakery, which doubles as a lobby, is the only sign of what the building rightfully should have been.

Chances are, though, that you won't even see the bakery, since it's on the less-frequented corner of the building. Chances are you'll enter through the side entrance, beneath the huge sign that says "Coca Cola" (and don't ask why they only serve Pepsi) and right into the hustle and bustle of - aaaah! - the real thing: the true Irani Café.

Lots of things have changed in a lot of Irani Cafés. Spoken history has it that immigrants from Persia set up these restaurants serving their distinctive cuisine, which explains the name. Several of these stay small corner shops that serve little more than tea, samosas and shockingly colored pastries, but some grew into respectably sized restaurants.

Times have changed in the decades since the State of Hyderabad became a part of India: costs have gone up, the clientele has changed, the spices are just not available, wood fires are hard to justify, tastes have changed ... you get the point. But a few Irani restaurants have stubbornly clung onto tradition, refusing to introduce dishes like Chicken 65 or (horrors!) Paneer Butter Masala. And yes, Madina leads the way.

Hyderabadi food is more than just biryani. Irani Chai, Osmania biscuits, Paaya, Zabaan, Haleem, ... and Madina serves them all. Entering from the Bakery side can take you back decades in time - to when lazy punkahs pushed away the summer heat as cigarette smoke wafted over hot cups of tea sipped by a largely male clientele wearing sherwanis and discussing politics, conspiracies, pearls and bangles in chaste Urdu while the Musi flowed stoically on.

The punkahs have long gone, replaced by electric fans and (horrors!) air conditioning - but that rarely works, thank God! The clientele has changed too. While the furnishings continue to lean away from Venus and strongly towards Mars, women need not feel out of place, particularly in the family-room upstairs. Unless, of course, you're showing more skin than a normal Burkha permits.

The waiters, like King Canute's courtiers, do their best to push back the rising tides of 21st century frenzy. You can linger over a cup of tea and a few samosas for as long as you wish. Others may come and share your table as the day passes, but it's unlikely you'll be asked to leave even if all you order is a "one-by-two", which, of course, is one cup of tea split between two afficianados.

The samosas, in keeping with time honored tradition, are served by the plate but are charged for by the "piece". Irani tea deserves a few chapters to itself. The recipe (recipes?) are like Mackenna's Gold - old, all reputed to be authentic, and none verifiable. The Musi, of course, is all but gone, choked by rampant construction.

If there's a fly in the ointment, it's the singular lack of hygiene in the restaurant. The disdain for cleanliness may be caused by an effort to keep prices down, but that's improbable, and more pertinently, unjustifiable. The prices are not very different than those in the many (cleaner) restaurants in Hyderabad that provide similar dishes. There's not much point caviling, though. Business is good!

The Food
The menu lists the usual exotica - tongue, hoof, brain, mince - and some basic tandoori dishes, but the accent, emphasis and focus are on mutton, mutton and mutton.

The biryani, of course, is a must-have. Whether you choose Chicken, Mutton, Egg or Vegetable Biryani, the rice is the same - beyond compare. The mutton is outstanding, but the accompanying gravy and raita are pretty poor. Pass these by and order a side dish - try the Dhumka - and a couple of rotis to make a good main course for two.

If you're dining here during Ramzan, the Haleem's another must-have. Stick with the basic Haleem, avoiding the more recent embellished versions. Oh yes, forget about that calorie count, by the way, regardless of what you order.

If you're not puritan, order a couple of cups of the Irani tea even with your food. Brewed just right, not too sweet, not too strong, and not too big either. Looks like the Management's been cutting the size of the cups, since you can easily go through two or three cups of tea with your food.

The Lassi's a disappointment. With the Rooh Afzah that's an essential ingredient in any "traditional" Lassi, and some unidentifiable flavor of ice-cream, it's certainly colorful, but doesn't meet the standards of the main dishes, and there are a lot of Irani restaurants that make it better. The Faluda's an improvement, but is nothing to write home about either, surprisingly. Give both a miss unless you have a very sweet tooth.

A good meal for two should run to about Rs. 150. Remember the portions are very generous. The waiters are informal and friendly too. While he may look like he's just stepped out of a mine, his heart is gold and that's what counts.

A couple of Osmania biscuits from the Bakery downstairs, and a Paan are in keeping with the general ethos, ambience and culture. And if you have the time, round it all off by strolling down to Charminar, the Chow Mohalla Palace or Laad Bazaar.

ADVERTISEMENT
This page was tagged for
hotel madina hyderabad menu
lassi A1 hyderabad
Madina Hyderabad
Madina
hotel madina in hyderabad
Follow @fullhyderabad
Follow fullhyd.com on
About Hyderabad
The Hyderabad Community
Improve fullhyd.com
More
Our Other Local Guides
Our other sites
© Copyright 1999-2009 LRR Technologies (Hyderabad), Pvt Ltd. All rights reserved. fullhyd, fullhyderabad, Welcome To The Neighbourhood are trademarks of LRR Technologies (Hyderabad) Pvt Ltd. The textual, graphic, audio and audiovisual material in this site is protected by copyright law. You may not copy, distribute, or use this material except as necessary for your personal, non-commercial use. Any trademarks are the properties of their respective owners. More on Hyderabad, India. Jobs in Hyderabad.