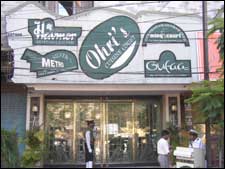 EDITOR RATING
7.5
Food
Service/Courteousness
Ambience
Value For Money
7.5
7.0
6.0
NA
Suggestions
Good for date/family
NA
Easy parking
NA
Long waiting
NA
If the Palace On Wheels won't chug its way here, we'll have to find other ways of living it up on a train. Even if it's one that doesn't move. Designed to look like a shiny subway train, Silver Metro is a good idea that's scored well on the test of time. People first came from curiosity, now they visit, usually with their families in tow, for large and lazy weekend lunches.

A multi-cuisine is better at some things than others are, and Silver Metro is a pleasant enough place to visit when it isn't crammed. Because in that respect it is very like a train, there's not enough elbow or leg room. Also the service is somewhat lacking in the congenialty department. Perhaps it's because they're rushed off their feet, although this really is no excuse.

Indian food, especially from up North, is the most popular here. Kebabs for starters, rice or, more likely, rotis, for main course with a suitably rich and heavy gravy for accompaniment, and ice cream to wrap up with. Nothing new or exciting here, but there are a couple of very good dishes on the menu.

Start off with the Malai Murgh Kebab or vegetarian Hara Bara Kebab. Work your way up to rotis with the Malai Kofta or the Dum Murgh. The Roti Ki Tokri (Rs. 90) is a good idea, and all the five varieties in it are good. The Dum Biryani is also a much-requested item, and it tends to be more elaborately spiced here than usual. Which means you have to go easy on the
side-dishes.

In continental, try the Macaroni Casseroles or the Chicken Lasagne. They have a few ice-creams for dessert, although this is better done at the Havmor parlour downstairs.

ADVERTISEMENT
This page was tagged for
metro guest house basheer bagh
silver palace basheerbag hyderabad
silver metro hyderabad
silver metro,ohris basheerbagh
Basheerbagh Restaurants / Bars
Follow @fullhyderabad
Follow fullhyd.com on
About Hyderabad
The Hyderabad Community
Improve fullhyd.com
More
Our Other Local Guides
Our other sites
© Copyright 1999-2009 LRR Technologies (Hyderabad), Pvt Ltd. All rights reserved. fullhyd, fullhyderabad, Welcome To The Neighbourhood are trademarks of LRR Technologies (Hyderabad) Pvt Ltd. The textual, graphic, audio and audiovisual material in this site is protected by copyright law. You may not copy, distribute, or use this material except as necessary for your personal, non-commercial use. Any trademarks are the properties of their respective owners. More on Hyderabad, India. Jobs in Hyderabad.