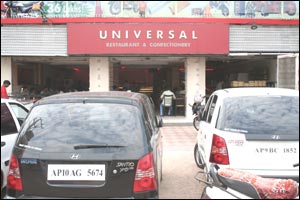 EDITOR RATING
8.0
Food
Service/Courteousness
Ambience
Value For Money
8.0
6.0
6.0
NA
Suggestions
Good for date/family
NA
Easy parking
NA
Long waiting
NA
One of the prime accused for the extremely crowded conditions of M G Road, Universal Bakery has been helping shoppers, families and students stuff their happy faces for a long time now. And they'll come back with their children, and their children with their children, and so on - essentially, all those people who haven't entirely succumbed to the lure of glitzy department stores and their over-priced food courts.

Especially jam-packed during the evenings and weekends, this bakery has such a wide range of food stacked in such large quantities, that it partially fills you up just to look at it through the big glass shelves. Picking what to get usually takes about 10 minutes, partly because you have to fight your way through people who will insist on standing near the counter even after they've ordered. And then you'll do the same once you've placed your order. Simply because the sight of all that food is so tantalising, and you can hardly wait to get hold of your own plate of burger and potato chips.

Thankfully, the service is quick and the portions are quite satisfactory. It is this combination of factors, plus the affordability of the place, that makes it such a hit. And there's no competition anywhere in sight.

The pizzas here deserve a special mention - they're loaded with veggies and cheese, but it's the special spicy tomato-based sauce that sets them apart. Veg. is preferable to chicken, and you can get an extra cheese topping for Rs. 5. The pizzas are only available in one size, which is enough for two hungry adults.

The burgers are also popular because they're large and served generously with mayonnaise and potato chips. The chips here are quite fresh and crisp. Other favorites include the spicy Chicken Drumsticks, Chicken Cutlets, Chicken Roll and other stuffed buns. The red-hot Chicken 65, Manchuria and Tikka are also good for snacking on.

A lot people do their birthday shopping here, and Universal's dessert section does so well, it now has a seperate area for itself, where you'll find cookies, cakes, pastries and tarts. The Macaroons, Butter Biscuits, Jam Tarts, Pineapple Pastry, Black Forest Cake and Chocolate Cake are at the top of the menu.

ADVERTISEMENT
This page was tagged for
Universal Restaurant & Confectionery Secunderabad, Telangana
google universal bakery telephone
paradise universal bakery contact no
universal bakery paradise phone number
universal bakery hyderabad
Follow @fullhyderabad
Follow fullhyd.com on
About Hyderabad
The Hyderabad Community
Improve fullhyd.com
More
Our Other Local Guides
Our other sites
© Copyright 1999-2009 LRR Technologies (Hyderabad), Pvt Ltd. All rights reserved. fullhyd, fullhyderabad, Welcome To The Neighbourhood are trademarks of LRR Technologies (Hyderabad) Pvt Ltd. The textual, graphic, audio and audiovisual material in this site is protected by copyright law. You may not copy, distribute, or use this material except as necessary for your personal, non-commercial use. Any trademarks are the properties of their respective owners. More on Hyderabad, India. Jobs in Hyderabad.