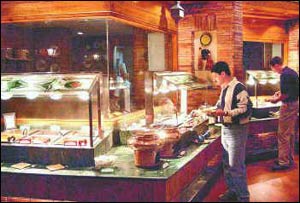 Deepa Menon / fullhyd.com
EDITOR RATING
9.0
Food
Service/Courteousness
Ambience
Value For Money
9.0
9.0
8.5
8.5
Suggestions
Good for date/family
NA
Easy parking
NA
Long waiting
NA
The Scene
Overlooking the swimming pool and designed to give you enough space to ponder over the buffet, Deccan Pavilion is different from other restaurants even in the same hotel (and if you don't know what hotel it is, you should, fast). It's laid-back, airy - thanks to the huge French windows - bright and cheerily colorful, and filled with the soft murmurings of guests who are in no hurry to leave. In fact, you'll have a tough time finding a table here on weekends, especially during dinner.

The Food
One of the most popular 5-star coffee shops in town, Deccan Pavilion serves up a few dishes that have acquired cult following. For one thing, nobody makes chocolate mousse like the chef here, and the midnight biryani is to die for. Breakfasts are nothing to sneeze at either, with the most tantalizing range of pancakes, waffles, eggs, juices and cold meats you're likely to see anywhere. So it's a small crater-sized hole in your pocket, but hey, you are going 5-star. And given that it is 5-star, you'll get good value for money at the Deccan Pavilion.

The buffets here are ever-popular, and the best way to sample the place. The variety is interesting, with enough to please even the fussiest of eaters, and there's usually something you'll find good enough to stop you at every table. The slices on the cheese tray, the cold cuts, the green salads, and any of the pasta are seductive draws. And as mentioned earlier, the chocolate mousse is the most loved of them all - indeed, when you're in the mood for the mousse at DP, nothing else will do. Buffets usually cost Rs. 700+, breakfast being slightly lower.

If you're in the mood for a substantial snack, try the Fish Ahoy, a form of fish 'n' chips, or the Tower Of Bagel, a truly humungous burger. Potato chops and the Vegetable Kebab Stickler are also great munchies. For a proper meal, get some rice or rotis to mop up a delight of Mrs. Betoon's Murgh Curry, or the Southern Railways Lamb Curry, both of which find their way into most buffets on popular demand.

Deccan Pavilion's Midnight Biryani Buffet is something else. The dum-biryani has been simmering in its spices for some time before the stroke of 12, so what you get is a most fragrant and succulent plate of gosht, murgh biryani. Served, of course, with mirchi ka salan.

There's a lot else, too - it's a buffet, remember? Paya Ki Nihari, veg/non-veg kebabs, 4 Indian gravies (curries, for the uninitiated), a dal and Indian breads, 3 Chinese items on Fridays and Saturdays, live counters for dosas and other stuff like vada pao and khaleji that varies each day, and 3 continental and 3 Indian desserts. The buffet is priced at Rs. 575 (Rs. 675 on weekend nights, taxes extra), and ends at 2am (2:30am weekends).

Another highlight at Deccan Pavilion is the dessert buffet. 14 continental and 8 Indian items, unlimited (and that includes the chocolate mousse), is quite compelling. You get sugarfree desserts, eggless desserts, brownies, cheese cake, puddings, pies, custard, gateaux, fruits and ice cream, plus 2 soups and 8 salads. You'd probably have to skip dinner to do proper justice to it (and skip several to be able to afford it - it costs Rs. 675 + taxes), but it is worth a few sacrifices. Dessert buffets are 12:30pm-3pm and 7:30pm-11pm.

ADVERTISEMENT
This page was tagged for
email @itcwelcomgroup.in loc:US
grand kakatiya buffet price
Deccan Pavilion Hyderabad, Telangana route
itc kakatiya+restaurant+deccan pavilion
review itc kakatiya
Follow @fullhyderabad
Follow fullhyd.com on
About Hyderabad
The Hyderabad Community
Improve fullhyd.com
More
Our Other Local Guides
Our other sites
© Copyright 1999-2009 LRR Technologies (Hyderabad), Pvt Ltd. All rights reserved. fullhyd, fullhyderabad, Welcome To The Neighbourhood are trademarks of LRR Technologies (Hyderabad) Pvt Ltd. The textual, graphic, audio and audiovisual material in this site is protected by copyright law. You may not copy, distribute, or use this material except as necessary for your personal, non-commercial use. Any trademarks are the properties of their respective owners. More on Hyderabad, India. Jobs in Hyderabad.