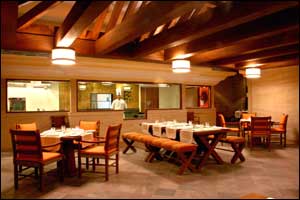 EDITOR RATING
7.5
Food
Service/Courteousness
Ambience
Value For Money
7.0
8.0
8.0
NA
Suggestions
Good for date/family
NA
Easy parking
NA
Long waiting
NA
The Scene
Kebabs & Kurries has a five-star hotel in its address, and an ambience with the passion of a speciality restaurant therefore comes as a bit of a surprise, given that the more expensive a hotel, the more understated and subtle its restaurants turn.

Themed as some kind of earthy place Rajput warriors would perhaps feel at home dining at, the restaurant replacing Indian Grills has a dhaba feel to it. The fabric canopy at the entrance sets the tone, the waiters are dressed in the attire of servants of North-Indian kings, and there's a lot of wood and copper artifacts around. A live kitchen shows enough clay and coal to consummate the mood and setting.

The Food
The name says it all. Mostly North-Indian, especially Lucknowi, cuisine adorns an elaborate menu, and there's a smattering of Hyderabadi too. Pudina Paneer Tikka, Hara Kebab Awadhi, Barrah Kebab, Charminar Kebab, Tala Gosht, Chui-Mui Koofteh, Murgh Angaar, Do Pyaza Begamati, Chooze Biryani, Chameli Pulao, Macchli Qorma and Mehlati Jhinge are some names from a list of about 75, and there's the expectedly deep winelist too.

It's expensive as hell, of course - a colacassia (kanda in Telugu) starter, Arbi Bhooni, costs Rs. 525. It's something you'd eat grumpily if your mother cooked it, and probably even refused to several times as an indispensable part of growing up.

Indeed, the best way to analyze the food at an expensive restaurant, clouded as your opinion is by the address and ambience and price and cutlery, is to assume it was cooked at a really downmarket joint, and decide how you'd feel about it. Kebabs & Kurries suffers from the standard ailment of star hotels - they have to cook for firangs who'd find milk bread from Bulaqi Kashmiri spicy, and Telugus who've grown up eating raw avakaya mixed in rice, using the same recipe. You'll perhaps need a refill in the salt shaker if you are a native. Or even someone else to eat what you ordered.

ADVERTISEMENT
This page was tagged for
email @itcwelcomgroup.in loc:US
kebabs and kurries hyderabad
MEHLATI JHINGE
itc gardenia pictures
kebabs and curries hyderabad
Follow @fullhyderabad
Follow fullhyd.com on
About Hyderabad
The Hyderabad Community
Improve fullhyd.com
More
Our Other Local Guides
Our other sites
© Copyright 1999-2009 LRR Technologies (Hyderabad), Pvt Ltd. All rights reserved. fullhyd, fullhyderabad, Welcome To The Neighbourhood are trademarks of LRR Technologies (Hyderabad) Pvt Ltd. The textual, graphic, audio and audiovisual material in this site is protected by copyright law. You may not copy, distribute, or use this material except as necessary for your personal, non-commercial use. Any trademarks are the properties of their respective owners. More on Hyderabad, India. Jobs in Hyderabad.